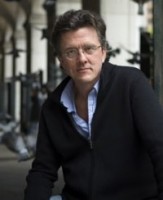 Kurt Andersen , who got his start editing at the Harvard Lampoon has since edited and contributed to an impressive list of publications — Time, New York and The New Yorker, to name a few. He has also founded a few titles of his own, Spy and Inside magazines among them. Kurt has written non-fiction and fiction books, television screenplays and scripts for theater and film. These days Kurt hosts Public Radio International’s Studio 360, which is heard on public radio stations nationwide, and is promoting his latest book, Reset: How This Crisis Can Restore Our Values and Renew America. Today he answers our 5QQ – Five Quick Questions.

Sometimes Google Alerts, sometimes NYTimes.com, but 90% of the time from the print edition of the New York Times.

How would I know? If the media missed it presumably so did I. (Although if I ran a news organization of sufficient size, I think I might have one technology/business reporter dedicated entirely to covering  electrical storage — batteries.)

Came from Nebraska to New York willing to be lucky. Like most writers: shy megalomaniac. Unlike many: happyish. http://www.kurtandersen.com