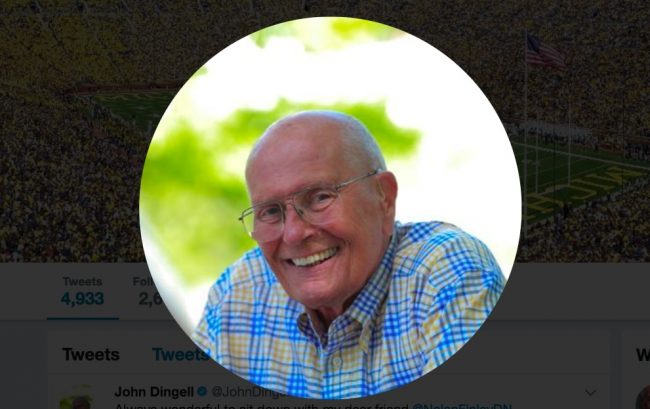 We have’t heard much from John Dingell lately.

The 91-year-old Michigander served his state in Congress for 60 years before retiring in 2015. Age, it seems, has not diminished him.

After Nazi and white supremacist violence engulfed the Charlottesville, Virginia, Dingell took a moment out of his very well earned retirement to offer what was probably the realest condemnation of the tragedy and those who caused it.

“I signed up to fight Nazis 73 years ago and I’ll do it again if I have to, ” he said. “Hatred, bigotry, & fascism should have no place in this country.”

I signed up to fight Nazis 73 years ago and I’ll do it again if I have to.

Hatred, bigotry, & fascism should have no place in this country.

Twitter has rewarded Dingell with more than 200,000 retweets. The Congressman followed up with a shot across the bow directly to Donald Trump.

Refusal to identify it, denounce it, & fight it makes one complicit in it.

Dingell, along with former Texas Rep. Ralph Hall are the only two remaining World War II veterans to have served in Congress. The tweet is a good reminder that while the U.S. handles it’s neo-nazi thuglets, we aren’t all that far away from the actual Nazis they are imitating and that a few of their grandfathers and great-grandfathers who fought against them are still with us.

Thank you for your service, John.