A ‘Proud’ John McCain Puckers Up To Sarah Palin
video

A ‘Proud’ John McCain Puckers Up To Sarah Palin 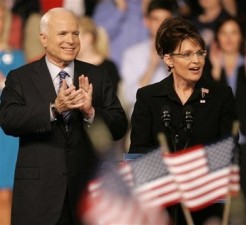 Want to get a quick sense of just how much power Sarah Palin wields in the Republican party at the moment, or, alternately, how badly in need of a leader the right is? Behold John McCain on Meet the Press yesterday responding to David Gregory’s question “Do you think that the — Sarah Palin’s brand of conservatism is what the Republican Party needs to regain power in the midterms and ultimately in 2012?”

A bit of a leading question, no? Particularly considering how Palin pretty much threw the McCain campaign staff to the dogs in her uber-selling memoir Going Rogue. But McCain it would seem, along with the rest of the Republican party, knows where his bread is buttered these days and has nothing but glowing remarks for Palin. (Video below)

[Gregory] You thought her book was fair?

[Gregory] She kind of felt like she was thrown under the bus by the McCain campaign at some level.

I think you’d be hard-pressed at this point to find anyone who thinks Sarah Palin is irrelevant. But what is perhaps most curious about McCain’s bonhomie support of Palin is whether in coming out in support of her McCain is still trying to justify his decision to appoint her his running mate or whether he is merely running scared along with the rest of the party ahead of its most powerful member. The irony of all this, of course will be if at the end of the day McCain goes down in history as the man who unleashed Palin on the political stage.