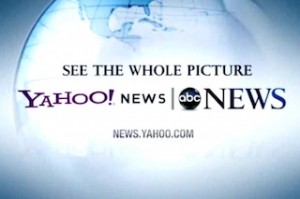 ABC News and Yahoo! just announced plans to launch a “strategic online news alliance” that will “blend ABC News’ global newsgathering operation and unrivaled lineup of trusted anchors and reporters with Yahoo! News’ unmatched audience, depth and breadth of content.” The announcement was just made on-air of Good Morning America, a video of which will be added shortly.

As announced on Good Morning America, George Stephanopoulos’ interview with President Obama, drawing on questions posed by readers of Yahoo! and ABCNews.com, will be webcast live on Yahoo.com and ABCNews.com today at 2:35pm ET.

“Yahoo! is committed to building the richest set of premium and personalized content experiences for our users. Our deep collaboration with ABC News further strengthens Yahoo! as the No. 1 online news source, greatly enhancing our already robust news content,” said Ross Levinsohn, executive vice president of Americas at Yahoo!. “ABC News and Ben Sherwood’s vision is completely symbiotic with ours; together we can create highly engaging experiences for more than 100 million users a month that will set the standard for the industry.”