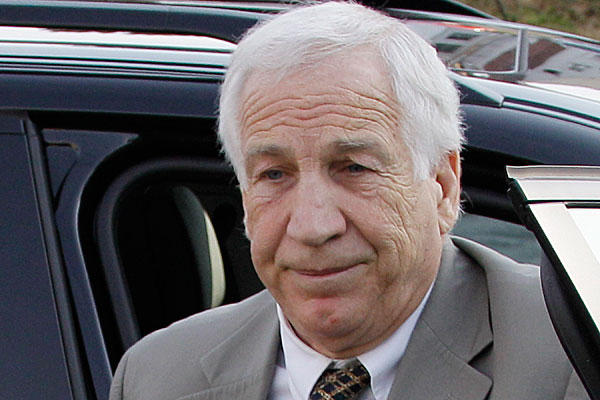 On Monday, Mediaite sister site LawNewz posted about the arrest of Jeffrey Sandusky on child sex charges. Jeffrey Sandusky is the son of former Penn State defensive coordinator Jerry Sandusky, who is currently in prison following his conviction in 2012 on charges relating to the sexual abuse of 10 boys.

Neither Jeffrey Sandusky nor Jerry Sandusky has any relation to Gerry Sandusky, a football broadcaster who does radio play-by-play for Baltimore Ravens games. But Gerry Sandusky obviously does have a very similar name.

He also has an active Twitter account. And after the Jeffrey Sandusky news broke, people tweeted angry messages at and about him. So “Gerry with a G” took to the social media platform to clarify that he’s not that Jerry Sandusky.

To all who again invite me to spend eternity in hell, just a friendly reminder, I’m Gerry with a G–no relation to former Penn St coach.

It’s something he’s long had to clear up in his Twitter bio.

I am Gerry with a G. Baltimore sportscaster, voice of the Ravens, communications coach and author. No relation to the former Penn State coach.

In an interview with the New York Daily News, Gerry said he has never considered changing his name, or even his Twitter handle.

“It goes back to the basic thing that I am really proud of my name,” Gerry said.

Unlike Jerry, Gerry did not give his own son a similar sounding name. His son carries the name Zack. And Zack is grateful for that.

“Hey dad, thanks for not naming me Jeffrey,” Zack wrote in a text message to Gerry, per the Daily News.