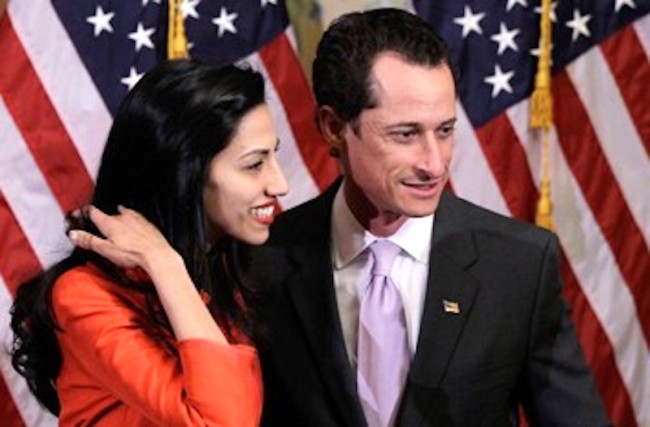 Earlier this month, Hillary Clinton aide — and long-suffering wife of Anthony Weiner — Huma Abedin appeared to finally have enough following Weiner’s guilty plea in a teen sexting case. After the former congressman agreed to a plea deal that will have him register as a sex offender and spend as much as 27 months in prison, Abedin filed for divorce.

However, if a report by the New York Post is to be believed, it appears that Abedin is having a tough time quitting the one-time New York mayoral candidate.

But Abedin has since renewed the lease on their pricey Union Square duplex — and invited back home the man who has repeatedly heaped humiliation upon her, sources told The Post.

The sext-crazed pol, who had been sleeping on his mother’s couch in Park Slope, was to move out Tuesday, a source said.

“He was supposed to move,” the building source explained. “But they just signed for another year.”

Another source said, “She still hasn’t served him with the divorce papers.”

The Post story also noted that another family friend says that Weiner is the one who takes care of their 5-year-old son while Abedin works. Therefore, Abedin is concerned about the child as Weiner “plays a very strong role in raising him.”

Prior to his guilty plea over sending sexts to a 15-year-old, Weiner ended up playing a role in the 2016 election. Since he was under investigation for his behavior, his laptop was seized by the FBI and emails from Clinton were found on it. This led to the infamous letter from then-FBI Director James Comey stating that more information was found in the investigation of Clinton’s emails less than two weeks before the election.