After Legalizing It, Legislators Drank Raw Milk, Then Got Really Sick

After Legalizing It, Legislators Drank Raw Milk, Then Got Really Sick 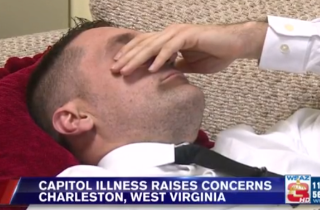 Usually, when the news brings up milk in any context, it’s about breastfeeding. Either Donald Trump is telling a breastfeeding lawyer she disgusts him or a woman is going on a talk show to defend nursing her toddler or Megyn Kelly is admitting to nip-slipping all over an airplane. Excepting this “milk-boarding” political theater counter-protest outside of a Planned Parenthood, we don’t often deviate from the topic at breast, and even that one has its roots in nursing.

All of that changes today! Here is a story about milk that is new and exciting.

West Virginians were recently given a new right by their legislators. After passing one little bill, lawmakers there gave everyone the chance to drink raw milk, which was previously illegal because it can contain parasites and bacteria.

The person who proposed the bill, Scott Cadle, brought the once-contraband drink to the statehouse to celebrate the big victory. Now, some lawmakers who indulged are feeling a little under the weather.

Pat McGeehan, a delegate from Hancock, was interviewed by WSAZ News. He said, “I’m not feeling that great. I think it’s probably just some sort of bad stomach virus.”

Even though he didn’t believe his illness was a result of the raw milk, he offered words of caution. He went on to say, “I don’t think it’s any riskier than eating raw oysters or anything like that. There definitely shouldn’t be a law against allowing people to do what they want within the framework of the rule of law. Just be careful.”

Some people, like the state’s governor, don’t think being “careful” is enough. Governor Earl Ray Tomblin vetoed a similar bill last year. His spokespeople said he signed this year’s bill because there were “precautions” in place to prevent people from getting ill. One has to wonder how he feels about all of the illnesses that just so happened to pop up after the drinking of the milk.