Are Democrats Really Going to Take Out Al Franken This Unfairly & Dangerously?
Opinion

Are Democrats Really Going to Take Out Al Franken This Unfairly & Dangerously? 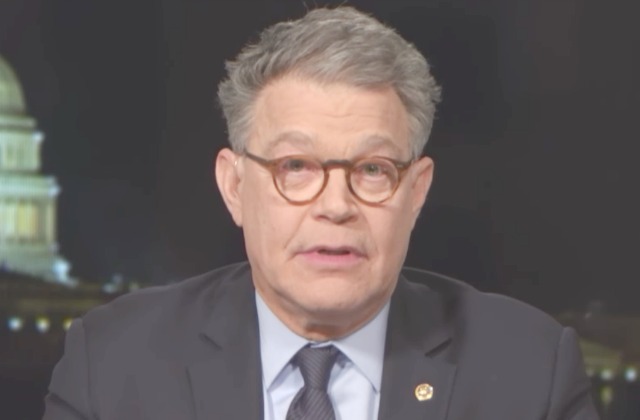 After an avalanche of Democratic senators calling for their colleague Al Franken to resign due to a series of sexual harassment allegations, it sure seems like his days are numbered. As a conservative, there was a time, not at all long ago, when I would have rejoiced at the demise of such far-left zealot.

However, based on what we currently know, I believe this situation is the most unfair and dangerous takedown of a prominent politician in recent memory. In my view, Democrats should be humiliated for engaging in what is clearly a strategic knifing of Franken in an effort to better position themselves to attack Donald Trump and Roy Moore, two people against whom have been leveled far more serious and credible allegations of sexual abuse.

I have been on the record since the start of the Franken story that the accusations made against him by Leeann Tweeden had very significant problems. Since then, though, the news media has ignored them, seemingly because they didn’t fit their preferred narrative and required them to awkwardly question an already sanctified “victim,” there have been numerous revelations bringing Tweeden’s claim into question. I was one of the very few (only?) people to write about them in the mainstream media, doing an extensive column about this for USA Today.

Based on what we know now, I do not believe that the essence of Tweeden’s story is true. At the very least, there are very serious problems surrounding it which make a very different narrative far more than plausible.

However, since it is perceived that the Tweeden allegation caused six other women (all of them telling very old stories, four of them anonymously) to come forward with somewhat similar accusations, that this must substantiate the original story as true. This is a very unfair and dangerous presumption. In fact, there is every chance that the exact opposite assessment it is also true.

Once someone is labeled in a media firestorm as a “groper,” then every interaction they have ever had is going to be instantly reevaluated through that prism. In Franken’s case, as a celebrity senator, he has probably had thousands of such contacts over the years (and yet, amazingly, no one has ever taken a photo or a video which shows him actually engaged in this type of behavior, and no one at Saturday Night Live ever even suggested that he did!).

The idea that six women have now said, “yep, I also had a weird thing happen with him many years ago,” is hardly, especially within the current environment, outside the realm of what might be thought of as the “margin of error” (to be clear, I am not suggesting that the alleged behavior is remotely acceptable, but rather that accidents can happen rather naturally). This doesn’t mean that Franken’s accusers are lying, but rather that time, loss of context, and the current media hysteria, can easily play tricks on someone’s memory.

A big part of Franken’s problem here is that, being a very politically correct and wussified liberal, he is (unlike how President Trump would have handled Tweeden) unable to defend himself without offending a large portion of his political base. His apology for things I doubt he actually did (or at least never intended to do nefariously) has set him up for his political demise by allowing the media to presume his guilt. Meanwhile, Roy Moore looks like he may simultaneously become a U.S. Senator by lying, attacking his accusers, and refusing to take any responsibility at all for his actions.

What an upside-down world we live in!

Of course, the Roy Moore situation is a large part of why Democrats are eager to throw Franken under the bus without waiting for an already planned ethics investigation to even start (interestingly, almost no Republicans are calling Franken to resign for the same reasons). They see defending him as a double-edged sword.

First, they would have to at least raise some doubt about the stories of the accusers (that’s outrageous victim shaming/blaming!!) which is politically toxic for them. Secondly, it would supposedly diminish their moral high ground when it comes to using the probably election of Moore as a political sledgehammer going into the 2018 midterm elections.

None of this would bother me so much, if not for the following factors. One, the truth of this situation is totally being lost and doesn’t even seem to remotely matter to anyone important (especially the news media). Two, this will set an incredibly dangerous precedent which will likely cause chaos and injustice in the future.

Think about it. If a prominent senator and possible presidential candidate can be instantly taken out because of one relatively benign story from before they were elected, combined with only two others fully on the record with even less threatening tales of inappropriate touching (without any evidence, despite the episodes literally being photographed), then will this not open the floodgates in the future?

What is to stop someone from being politically targeted with similar, this time totally fabricated, accusations? After all, the allegation bar is now very low, all claims must now be seen as true no matter what, and no actual evidence (other than a posed, out of context, photo where the accused isn’t even touching the accuser while they are wearing multiple layers of heavy clothing) is needed. The road map for an innocent person’s destruction has just been both created and widely publicized.

Do we seriously believe that no one will follow it, or that what Franken allegedly did is worth this inevitable cost?