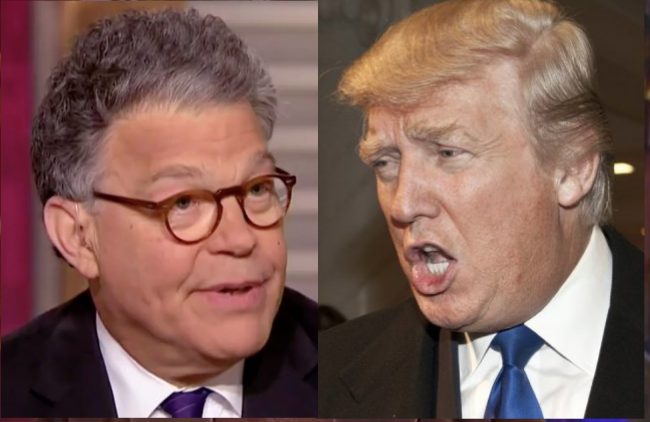 On Friday morning, I went on HLN TV to discuss my recent column (gasp!) defending a guy I loathe, Al Franken. During the appearance, I made the assertion that President Donald Trump, for whom I also have disdain, is at least strategically smart enough to fight back against the abuse allegations against him, while Franken, handcuffed by his PC liberalism, is rendered impotent to do so.

I concluded that this is why Trump survived the Access Hollywood nuclear bomb, while Franken may not do the same with the relative BB gunshot he took this week. This is a reality which should be seen as an embarrassment for our country, but it is, nonetheless, also a very sad truth.

I was rather amused then when, later in the day, White House Press Secretary Sarah Huckabee Sanders was asked what the difference is between the one allegation against Franken and the many against Trump (yes, Maria Bartiromo, they DO exist) and her answer was a pure vindication of my assertion. She claimed, somehow with a straight face, that the reason Franken is “guilty” and Trump is not is that Franken admitted wrongdoing and Trump did not.

Of course, since we all heard the Access Hollywood tape we all know that this is just flat-out false. We can also be confident that Trump enjoyed hearing Sanders give that Orwellian response even more than he loves getting complimented by foreign dictators.

In that one answer, Sanders inadvertently articulated the fundamental difference between Trump Republicans and the Democratic Party, and why he is still, like Bill Clinton before him, the Roadrunner, always escaping the grasp his opposing party’s Wile E. Coyote. In today’s politics, it is usually far safer to respond to allegations by being a lying, arrogant, jackass, than someone who, like Franken, tried to take the high road and came off like something Trump might feel entitled to grab because he is a star.

It is ironic that Trump succeeded Barack Obama, whose entire narrative was connected to the word “audacity” thanks to his book, The Audacity of Hope because no modern American politician has ever been more audacious than Donald Trump. For Trump to attack Franken on Twitter Thursday night was like if O.J. Simpson publicly went after some fellow celebrity for getting a contentious divorce.

It is this audacity, and pure lack of class, which makes Trump extremely poorly suited to be the president of the United States. But it also gives him a huge advantage in situations like this because, at least to his cult-like following, as long as he doesn’t ever apologize (and thus create the perception of having done something very wrong), or stop his “alpha male” act, they will never ever leave him.

Conversely, if Trump had ever handled a situation as meekly and defensively as Franken, even some his most ardent followers might start to lose faith in him like fans of Superman stunned to see him forced to take the bus. My guess is that this theory will never be tested because such a response is simply not in his seemingly flawed DNA.

With that in mind, it might be instructive to consider how Trump might have handled the Leeann Tweeden allegations very differently from the classy, but not particularly effective manner, in which Franken has. Here, based on my imagination, is how that would have likely gone:

Trump on the Kiss: “She begged me to kiss her. I didn’t want to do it, but everyone loves the Trump lips and I wanted to put on a good show, so I let her do it. She wasn’t a good kisser. I was really surprised. She was very attractive. Quite beautiful. Did you see her in Playboy? Nice landing strip. Am I right? Google her. She wasn’t a ten, even back then. She was no Melania, I’ll tell you that. But at least a solid nine. Now that she’s on radio she’s an eight, tops. She was lucky I let her do it. She thanked me for it. Believe me!”

Trump on the Photo: “That’s totally ‘Fake News!’ It was a joke. In fact, it was her idea. Everyone thought it was the funniest picture the USO had ever taken in their entire history. The media says I groped her but that’s ‘Fake News!’ If you look at the photo I’m obviously not even touching her. I’m hovering, posing for the camera. And can we be serious for a minute? Can we? She was wearing a flak jacket, military grade, (you know I love our military, right?) over a thick coat. What would be the point of grabbing her boobs like that? Am I right? I mean, come on, I have grabbed many very beautiful breasts before, believe me. Don’t get me wrong, hers seemed nice, but it would have no great thrill for me to do that. Believe me!”

Trump on her Credibility: “This woman, is a former “Hooters” girl and Playboy model, she posed nude for them, the Christmas edition, very nice. Merry Christmas, by the way. We can say that again now that Trump is president. You are welcome! This former Playboy model and television poker host, by the way, who watches that stuff? Poker on TV, I don’t get it. Well, apparently her ratings were terrible. Not anything like The Apprentice of course. We always had great ratings, until Arnold Schwarzenegger killed it.”

“So now she’s on talk radio. What a shame. An attractive woman, now doing radio. On a station in Los Angeles with no ratings. Just horrible. The host of the show she’s on hates me. I don’t know his name. Some loser with no ratings. And did you hear that a close friend of Hillary Clinton tweeted, hours before this ‘Fake News!” broke, that this trash was coming? Total political hit job. Nasty stuff. Real nasty stuff. Just terrible. Someone should lock Hillary up.”