Why are No Republican Senators Calling for Al Franken to Resign? (Update) 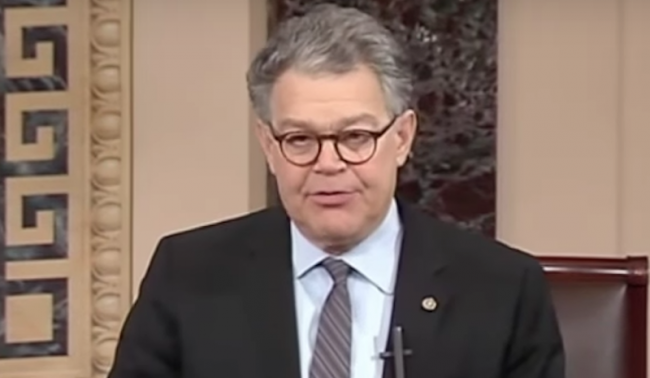 Ed. note — at least one Republican Senator has called for Franken’s ouster since originally published this column. See below for the update.

Amid the avalanche of Senators calling for Al Franken to resign from office, there is a curious distinction to be made about those demanding ouster: not one Republican lawmaker appears to have publicly called for Franken to resign. All have been Democrats. Why is that exactly?

Some background for any readers suddenly waking from a coma: since allegations of unwanted sexual advances were brought forth last month by his former USO partner Leeann Tweeden, Democratic Senator Franken has been in something of a desperate fight for his political life. Since, many more women have come forth to make similar allegations, with the latest prompting the avalanche of calls for his resignation from his senatorial colleagues.

But an inspection of those calling for Franken’s ouster reveals they are all members of his own party. Not one is a Republican. It’s not as though Minnesotan Senator – and brash former SNL writer/performer–  is a pariah in his own party. Quite the opposite, he’d previously been held up as something of a hero who followed in the political style of former Minnesota Senator Paul Wellstone.

Nor is Franken beloved by his opponents across the political aisle. His tough cross-examination style during many a Senate hearing (most notably with Attorney General Jeff Sessions) has made him quite the inimical figure with his ideological foes, many of whom are almost certain to be privately delighting in Franken’s abrupt fall from grace.

The reason the GOP cannot call for Franken to resign over these allegations is that would make them look like ENORMOUS hypocrites when the resident of the White House (and ostensible leader of the Republican party) ALSO has more than a dozen allegations of sexual misconduct facing him. Heck, there is even audio of President Donald Trump bragging that “when you’re a star” you can grab a woman’s genitals.

And lest we forget the GOP candidate for Alabama Senate Roy Moore, who has had numerous allegations of inappropriate conduct with underage girls come to light, which even led the RNC to drop support for his candidacy…until Trump endorsed the besmirched candidate and it somehow became okay for the RNC to flip-flop and throw its enormous financial support back behind the alleged pederast.

Politically savvy readers may read this column and think to themselves that it is a rather banal and obvious point to make that the Republicans are seeing the election in Alabama only in transactional terms completely devoid of any moral rectitude for which the Grand Old Party long prided itself. We are living, however, in a time where banal and obvious points are getting lost in a miasma of distractions and empty political rhetoric — they still must be made.

The prime motivator for Republicans loathe to calling for Franken’s resignation? Elected officials of all stripes are the frequent guest on cable news, and none want to answer the inevitable and simple question of the double standards between Franken and Moore. Or as former Arkansas Governor Mike Huckabee recently said during an appearance on Fox News explaining his support of Roy Moore, if the US Congress can be a place for Al Franken and John Conyers (who recently announced his retirement) then why not Roy Moore? Well, perhaps it’s time to update that position.

Update: Mitch McConnell has joined his Democratic Senators in also calling for Franken’s resignation, though not for alleged misconduct, but because Franken has “lost the support of his colleagues” and his “constituents.” This reasoning conveniently allows him to continue to support Roy Moore.