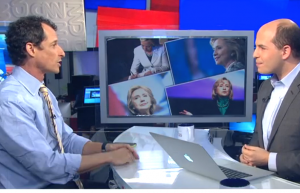 Anthony Weiner isn’t just a liar…he’s of the compulsive variety.

But one can redeem himself, right? America loves a comeback. And perhaps a few years removed from destroying his own political career, he’s mellowed, gained perspective, even learned the difference between truth and fiction.

But after watching the former Congressman and New York City Mayoral Candidate on CNN’s Reliable Sources Sunday, you can basically eliminate any hope of redemption outlined in the last paragraph.

Booking Mr. Weiner as a guest to analyze media is a curious one. Yes…on the surface, he’s been more than interesting as a general political pundit in the cable news world in the past. Few would argue with this description: Candid, fearless, loves to mix it up, and owns the kind of cynical, quick sense of humor of your typical New Yorker. But a quality guest is also a credible one, and before watching (belatedly) the 50-year-old on Brian Stelter’s program, the conversation was approached with an open mind.

About four minutes in, things were moving along about as expected: Weiner defending his wife’s (Huma Abedin’s)–boss (Hillary Clinton) and looking happy just to be back on national television again. And then came the money quote…the one that should give every producer and host pause before considering if 6-8 minutes of Weiner in a guest spot is worth it: “We (Huma and I) talk about just about everything except the campaign,” Weiner said, “I don’t think she even knows I’m here today, except that she’s alone with Jordan.”

In other words, Weiner wants you to believe the following conversation went down in his home before heading over to Time Warner Center:

Anthony: Honey…I have to head out for a bit.

Huma: Sure. Where are you headed?

Anthony: Nowhere important. I’ll be back around noon.

Bottom line: If you think Anthony Weiner could go on national television to break down media coverage as it pertains to Hillary Clinton’s/Huma Abedin’s presidential campaign without that camp having any idea he’s about to speak on their behalf, you’re patently not sane. The Clinton campaign is a well-funded machine that is aware of every aspect of its public outreach, and Weiner isn’t appearing anywhere…especially on a national outlet on a Sunday morning, without everyone involved–including the aforementioned Clinton and Abedin–knowing beforehand.

As for the compulsive liar label to kick off the column, feel free to check out this 2013 piece by The Daily Beast’s Patricia Murphy. In it, she chronicles 68 lies Weiner once told in eight minutes, which must be a record…even for any Democrat or Republican (or Russian). Here’s an excerpt as an appetizer:

“We don’t know where the photograph came from,” he (Weiner) said. Lie.

“We don’t know for sure whether it’s been manipulated.” Lie.

You get the idea. A mind that can produce so much fiction that quickly can’t be healed easily…let alone in less than two years. In Sunday’s case, Weiner reverted back to his old self in that one sentence about going on CNN without even his wife nor her campaign staff and candidate knowing. If Weiner is truly to be trusted–and he has zero margin for error–he failed in obvious fashion.

Stelter tweeted later he received more viewer email from the Weiner interview than any other segment that morning. That’s a good news/bad news scenario for a program not billed as fiction and/or comedy in your channel guide:

The good news is…Weiner generated a response from those watching at home. Whether that was positive or negative isn’t clear (here’s betting on the latter).

The bad news is…it’s clear Weiner lied with the cameras rolling once again, and the host didn’t bother to challenge him on the whole wife-doesn’t-know-I’m-on-CNN-talking-about-Hillary claim outside of saying, “Really?”

Regardless, Weiner has been booked before and will be booked again. Infotainment isn’t exactly known for its moral compass. And politicians–present and former–spin invalid truths on the air all the time.

But Reliable Sources–a respected media show in existence for 23 years–can and must do better than the caricature of himself that is Anthony Weiner.