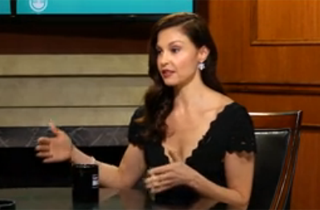 Actress Ashley Judd‘s name comes up often whenever people give political forecasts, specifically for higher office in the state of Kentucky. Judd doesn’t mind stoking the speculation, which she did this weekend during an interview on Larry King Now!

Judd, a well-known Democrat and political activist, once she seriously considered challenging Majority Leader Mitch McConnell in last year’s Senate midterms but chose not to run (her mother hinted that Judd did not like Washington insiders).

However, during her appearance, Judd suggested to King that she could get behind being governor:

Governor seems like an interesting position too, particularly in Kentucky, where we have a mono-economy, really abusive mineral extraction, pervasive poverty, low educational attainment. We’re really low on all the different social indices and because of my work in developing economies, I actually — both as a Kentuckian and someone who’s traveled around the world a lot — have a deep bench on that stuff. ”

It would be a fascinating candidacy, in that it would be fun to imagine what this would be like…in 2019:

According to the state of Kentucky, Judd must file her intention to run before the last Tuesday of January if running in a party requiring a primary election. If she wanted to run as an independent, she still could file by April 1st, but seeing as she’s a longtime Democrat (and actually a former delegate!), that’s not really an option.

Watch Judd talk about a thing she can’t do below, via Ora TV: