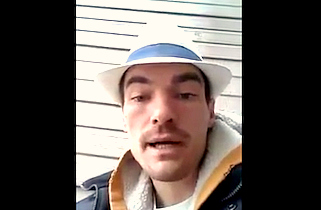 In a video posted to his Facebook page and quickly removed, Open Carry Tarrant County leader Kory Watkins warned Texas legislators opposed to what he called “constitutional carry”* that “treason is punishable by death.”

“I don’t know if [lawmakers] forgot what their duty is, but it’s to protect the Constitution,” Watkins said. “Going against the Constitution is treason, and my friend, that is punishable by death. That’s how serious this is.”

Watkins said his actions currently resided in the serious but non-violent “Rosa Parks” territory, but that if lawmakers didn’t budge they would soon escalate. “They better start giving us our rights or this peaceful non-cooperation stuff is gonna be gamed up,” he said. “We’re gonna step it up a notch.”

Watkins, whose chapter was disowned by the state organization after his demonstrations in fast food restaurants earned a rebuke from the NRA, has rapidly made himself infamous in the Texas legislature. He and the chapter were escorted out of legislators’ offices on the first day of session for confronting staffers; after Lieutenant Governor Dan Patrick, a far-right conservative, said the legislature would likely not consider open carry this term, Watkins posted a video to Facebook in which he said, “It’s time to hunt some Republicans.” The net effect has been to cause lawmakers to back away from open carry legislation.

*Unlicensed open carry, apparently to get around restrictions on people with criminal records purchasing guns.