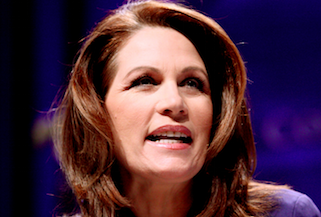 While many House Republicans were dealing with the ongoing government shutdown this weekend, Rep. Michele Bachmann was giving an interview to Christina radio show Understanding the Times, in which she told host Jan Markell how she knows that the biblical “end times” are near.

Bachmann said it’s “hard to believe” but on the day of the Washington Navy Yard shooting, President Obama “waived a ban on arming terrorists in order to allow weapons to go to the Syrian opposition.” The congresswoman appeared to be referencing the Obama Administration’s decision to send anti-chemical weapons gear to vetted Syrian opposition forces, not known terrorists. “Your listeners, US taxpayers, are now paying to give arms to terrorists including Al Qaeda,” she said.

The reason Americans haven’t heard about this, Bachmann said, is because it happened right in the middle of the Navy Yard shooting and the Kenya Mall attack. “This happened and as of today the United States is willingly, knowingly, intentionally sending arms to terrorists,” she said. “Now what this says to me, I’m a believer in Jesus Christ, as I look at the End Times scripture, this says to me that the leaf is on the fig tree and we are to understand the signs of the times, which is your ministry, we are to understand where we are in God’s end times history.”

Bachmann clarified that she wasn’t making these comments to cause Americans “fear” and “rather than seeing this as a negative, we need to rejoice.”

Listen to audio below, via Understanding the Times: