Media Gets Trashed On Too Much ‘Beer Summit’
VIDEO

Media Gets Trashed On Too Much ‘Beer Summit’ 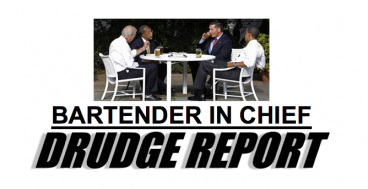 So, the President, a cop, and a Harvard professor walk into a bar…er, a picnic table. By this point you probably know the rest. Was there other news yesterday? Who knows. The Presidential “it’s not a summit” “Beer Summit” dominated from morning to night. At one point CNN split the screen into six windows in order to cover all the angles, literally. And while cable took to the story like alcoholics to an open bar, print reporters all seemed slightly apologetic that they were devoting this much energy and attention to it. But devote they did. Especially after Joe Biden made an unexpected appearance requiring some quick on-the-spot investigating to determine what he was drinking (Buckley’s, it’s a non-alcoholic beer — Biden doesn’t drink), and Gates who threw a wrench into the best laid plans by opting for Sam Adams Light at the last minute.

Afterward — meaning 30 seconds later — some members of the media appeared momentarily frustrated that the summit had turned out to be a short, silent, photo-op. Where was the teachable moment in that President Obama?! The press was only slightly appeased when Sgt. Crowley gave his own press conference following the drinks (see below). Anyway in case you missed any of it here is a quick roundup of media coverage, couched in mild apology (except for Drudge, who doesn’t apologize), some good puns (”audacity of hops” from Jake Tapper for the win) and, in our case, set to music.

To begin, the play-by-play from some reporters on the scene who wanted you to know they were aware that the wasn’t real news:

• “For what it’s worth, the only one who drank the 100% American beer was Prof Gates, who opted for a Sam Adams Light.”

• “It’s over. Both Crowley and Gates and families have departed the WH. (Now we wait for the new era in race relations to begin.)”

And then the official sum-up from the Times vaguely acknowledging that perhaps the press had gone a bit overboard in it’s coverage:

Also this from Michael Scherer at Swampland, acknowledging that there were in fact important issues to be discussed, they just were addressed by the participants:

The two combatants in a confrontation that roiled a nation, raising unresolved issues of a race, class and police power, were shown to sit together with the nation’s political leaders. Harvard Professor Henry Louis Gates Jr., Cambridge Police Sgt. James Crowley, Vice President Joe Biden, Obama and four glasses of beer. That was all, save some peanuts. Never mind the complex issues. Never mind the question of resolution. Never mind what they said.

Here’s the official responses from the participants, wherein we learned that no apologies were made over beers but Gates and Crowley are considering a lunch date.

President Obama said: “I have always believed that what brings us together is stronger than what pulls us apart. I am confident that has happened here tonight, and I am hopeful that all of us are able to draw this positive lesson from this episode.”

Professor Gates: Sergeant Crowley and I, through an accident of time and place, have been cast together, inextricably, as characters – as metaphors, really – in a thousand narratives about race over which he and I have absolutely no control…Let me say that I thank God that I live in a country in which police officers put their lives at risk to protect us every day, and, more than ever, I’ve come to understand and appreciate their daily sacrifices on our behalf. I’m also grateful that we live in a country where freedom of speech is a sacrosanct value and I hope that one day we can get to know each other better, as we began to do at the White House this afternoon over beers with President Obama.

Sgt. Crowley, who opted to hold his own press conference — who wants to bet there is a book deal on the way for him as we speak?:

And here’s The Daily Show version: