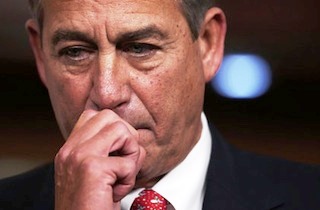 Before the fingerpointing over the government shutdown even had a chance to really get going, Representative Steve King (R-IA) found the real driver behind the coming battle over the debt ceiling: “The march of history got us here.”

King is not the most articulate voice for the GOP’s legislative strategy, but in this case his penchant for tin-eared overstatement perfectly encapsulated the Republican Party’s new attitude toward breaching the debt ceiling: it’s out of their hands.

“That seems to be the path that we’re on,” House Speaker John Boehner (R-OH) told George Stephanopoulos this morning, with a petulant shrug, as if he were in someone else’s taxi.

Boehner’s passivity is stunning for a number of reasons, not the least of which is that he could single-handedly avoid default simply by bringing a vote to raise the debt ceiling. In fact, one person said this week he would do just that: John Boehner, who, according to congressional sources, has been quietly telling his caucus that he would raise the debt ceiling with Democratic votes before he allowed default. Some thought this information was leaked precisely to force Boehner off of this position—if he was heard admitting he wouldn’t kill the hostage, the hostage-taking gig was up. Thus you have the conflicted Boehner we saw this morning, both defiant and resigned, daring Obama to call his bluff yet acquiescent to the blame that would follow.

This strange new determinism—the idea that breaching the debt ceiling is dialectically and structurally necessitated—is simply the latest in a series of GOP attempts to avoid responsibility for the shutdown and looming debt crisis. Their previous attempts, mostly focused on ObamaCare, have been so lackluster that at least one poll says that the House is now back in play in 2014, the exact 1998-redux Boehner was trying to avoid. His only maneuver left is to try to eradicate the perception of the GOP as catalysts, to make them seem mere players in an historically inevitable showdown.

Crucial to this narrative is a bit of historical revisionism. After all, we were here just two years ago, when the United States’ credit rating was downgraded as a result of the debt ceiling brinksmanship induced by the 2010 tea party class. The downgrade was the most blaring sign that the debt ceiling debate was unforced error of irrevocable magnitude. It reflected poorly on everyone, but especially on Republicans, who, prior to that moment, had been making steady gains against Obama’s popularity. The debt ceiling debacle slammed the breaks on that: the GOP’s reputation with voters plummeted and never regained, leading to a substandard performance across the board in the 2012 election.

That, at least, is the canonical version of the debt ceiling fight of 2011. A new view was trotted out by Rand Paul (R-KY) on Meet the Press this morning, in which the deficit hawk revised Standard & Poor’s judgment to be almost entirely a verdict on the United States’ debt itself. He’s not wrong: Standard & Poor’s did chide the deficit reduction plan for “falling short” of what the agency wanted for a post-recession debt stabilization. But S&P argued the fiscal compromise in large part underwhelmed due to the absence of added “revenue,” better known to us laypeople as taxes. As these were the days of hardline conservatives refusing even a 10:1 ratio of spending cuts to tax increases, it was clear that revenue, no matter what it was called, wasn’t on the table. Thus tea party intransigence was not a tangential aspect of S&P’s decision, but the primary wrench in the machine they wanted to see functioning.

But under Paul’s reading, the debt ceiling brinksmanship of two years ago finally and thankfully threw the U.S.’s debt problems into relief, an emergency action notarized by the rating agency’s response. This reading neatly flips the heroes and villains of that dispute: if S&P were alerted to the U.S.’s debt problem by the tea party’s fit over the debt ceiling, it makes the GOP into conscientious objectors rather reckless legislators, people who spotted the fire rather than started it.

Today’s Republicans clearly want this battle over the debt ceiling to be an extension of this imaginary version of the last one. “This fight was going to happen one way or the other,” Boehner told Stephanopoulos this morning, and if you buy the theory that breaching the debt limit is not an avoidable catastrophe irresponsibly induced by one party but another iteration of the GOP refusing to ratify more profligate spending, he’s right.

John Boehner most likely doesn’t buy this theory, as, if reports are to be believed, he’s working furiously behind the scenes to avoid the exact scenario he’s decrying as inevitable on the Sunday shows. But the party he only fitfully controls very much believes this tale of their own concoction, and that should gravely worry everybody. As of two weeks ago, breaching the debt ceiling was unthinkable. Now it’s the march of history.