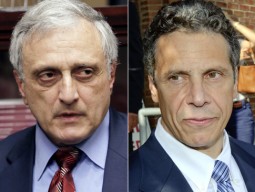 Carl Paladino, GOP nominee for New York State governor, bastion of class, and apparently taking a page from Sarah Palin‘s political handbook, has sent out an open letter to New York voters calling opponent Andrew Cuomo‘s “cojones” into question. Paladino, perhaps unmanned by Cuomo’s refusal to mention him by name after last Tuesday’s surprise primary win, has hit back below the belt in an effort to draw Cuomo in to a debate.

So Andrew, for the first time in your life be a man. Don’t hide behind daddy’s coattails even though he pulled strings to advance your career every step of your way. Come out and debate like a man.

Hat tip Gawker, who also points out that the grammatical error above are all Paladino’s (or whomever is writing his open letters). Cuomo has yet to respond (though he has said previously he’s open to debates) but it’s hard to see how he will be able to make it through to November in this political climate without at least addressing Paladino directly. Particularly since the more people get to know Paladino the more they seem willing to vote for him. Via Elizabeth Benjamin comes the latest Rasmussen poll (taken last week) which shows Cuomo leads Paladino by 16 points, down from a 29 point lead in July.