Is Mitt Romney The Hillary Clinton Of The Right? 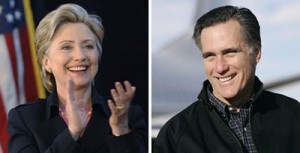 As Tea Party Fever spreads in conservative circles, many established Republicans are trying to catch it — look no further than once-moderate-ish leaders like Newt Gingrich pandering to his party’s newly fervent populist wing. Mitt Romney, however, is hardly ever confused for a populist, and that’s why the seers at NPR suspect his 2012 campaign might go the way of Hillary Clinton‘s, circa 2008.

How does NPR think the fiscally oriented former governor of Massachusetts — the state of school field trips to mosques, gay marriage, but also, to a lesser extent, Scott Brown — will fare against the new wave of anti-establishment culture warriors? Not well:

The Tea Party movement means many things to different people, but it means one thing to Mr. Romney. It means the Republican riptide he reasonably expected to ride in 2012 is rushing past him instead, lifting other vessels quite different from his own.

No surprise there, nor in the fact that the almost robotically slick Romney lost to the more fleshy, salt-of-the-earth Mike Huckabee in a poll at this weekend’s Values Voters Summit. What raises eyebrows is the prospect of Romney being the Clinton of the Republican Party:

Underestimating the power of activists, even small numbers of them in places like Idaho and Nebraska and Kansas, ultimately cost Hillary Clinton the nomination she once assumed was hers. … So in this preidential cycle, we are all paying more attention to the populists. Maybe too much attention. But then, if you are Mitt Romney, can you ignore the lesson Hillary learned so bitterly?

Not anymore, he can’t. The last thing Romney probably wants is to be compared — by NPR, no less — to Hillary Clinton. But 2012 is a long way from now — if you can recall, almost nobody during the 2008 primary season had heard of Sarah Palin, Christine O’Donnell, or tea parties that weren’t thrown by dead Bostonians or living children — and, if he heeds NPR’s advice, Romney just might have a chance yet.