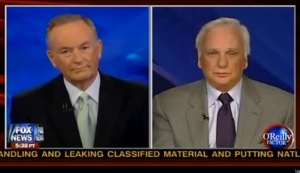 When Senator Robert Byrd died last week, many wondered how his eulogizers might treat an ugly part of his past: his role as a leader/recruiter in a West Virginia chapter of the Ku Klux Klan. Former President Bill Clinton answered those questions while speaking during the memorial service, ostensibly defending Byrd’s part in the Klan by saying “he was a country boy from the hills and hollows of West Virginia,” adding “he was trying to get elected.” Fox News’ Media Analyst Bernard Goldberg took exception to the cavalier shrugging-off of Byrd’s racist past.

It’s a difficult thing to do – criticize the words of someone praising the past of someone who has just past (especially one who has given so many years of service to his country.) However, Goldberg dared to point out what he seemed to be an offhand and inappropriately informal explanation of Byrd’s time in the Klan. And he makes some very good points without stomping on the legacy of the departed Senator.

First, the excepted words of Clinton which raised Goldberg’s ire:

There are a lot of people who wrote these eulogies for Senator Byrd in the newspapers and I read a bunch of them. and they mention that he once had a fleeting association with the Ku Klux Klan. What does that mean? I will tell what you it means. He was a country boy from the hills and hollows of West Virginia. He was trying to get elected. And maybe he did something he shouldn’t have done, and he spent the rest of his life making it up. And that’s what a good person does.

Goldberg shows both deftness and reason in his critique of Clinton’s eulogy, given that damning the past of the “dearly departed” is ostensibly a very tricky wicket:

Well, first I thought the obvious. You don’t use a funeral to unload on the dearly departed. So I understand why Bill Clinton, you know, did what he did to some extent but he went way, way, way too far.

First of all, you heard the sound bite just then. Bill Clinton says well, he was just a country boy from West Virginia, trying to get elected as if, what, that somehow justifies joining the Klan? Even in the 1940s, Bill, decent people didn’t join the Ku Klux Klan. By the way, Robert Byrd wasn’t just a regular bigot in the Ku Klux Klan, he was a special bigot. He recruited the other morons who joined the could you Ku Klux Klan. Imagine today if some politician felt he had to bad mouth or bash black people in order to get elected. Do you think Bill Clinton would be be so cavalier or anybody else for that matter as to say, well, come on, he is just a country boy who is trying to get elected. Of course not.

And then the second thing Clinton said is that Robert Byrd spent the rest of his life making it up. That’s not even true. In 1964, Robert Byrd not only voted against the civil rights act, but he filibustered for 14 hours. One year later in 1965, He voted against the voting rights act. Now, in fairness, later on in life, Robert Byrd championed making Martin Luther King’s birthday a national holiday. We will give him that.

But this leads to one of two possibilities. Either he had a genuine change of heart, which is possible, or he is simply made another political calculation. Just as he joined the Klan for political reasons, maybe he realized that being a bigot wasn’t going to work anymore. I’m not saying that you use the funeral to bad-mouth the guy but Bill Clinton, ever the statesman, could have compromised and just said a little bit less.

O’Reilly summed up by reaffirming that “we a a nation that believes in forgiveness and redemption” but hedges with “I don’t think the media would have been so kind if Robert Byrd been a Republican.” The Fox News anchor ended with a note of forgiveness towards the late Senator, saying “I think that’s what we do in our Judeo-Christian tradition.”