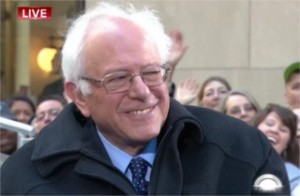 The 2016 presidential election has turned like an M. Night Shyamalan movie with the world’s most gullible audience, as heretofore bulletproof presumptive Republican presidential nominee Donald Trump has suddenly been felled by a general electorate that doesn’t see politically dead people. The latest twist is that according to the most recent Federal Election Commission filings, Trump not only has less cash on hand than presumptive Democratic nominee Hillary Clinton, he has even been badly outpaced by independent Vermont Senator and Democratic presidential runner-up Bernie Sanders:

According to Sanders’s latest filing with the Federal Elections Commission, his campaign took in $15.6 million during the last full month of campaigning. That compared with $26.2 million for Clinton, the first time all year that the presumptive nominee has decisively out-raised her surprisingly powerful challenger. And it represented a steep fall from April, when he raised $25.8 million.

As the money came in, however, Sanders spent it at a slower clip than previous months. He ended May with $9.2 million on hand, having ended the previous month with just $5.8 million.

That’s compared to $1.29 million cash on hand for Donald Trump’s campaign, which means that the Democratic runner-up who has effectively stopped campaigning has septupled Trump in the cash department. Trump has lagged in the fundraising department all along, but like Bruce Willis in Unbreakable, has been impervious to damage up until now and like everyone else, has missed the Signs that trouble was coming. A general election, as Trump is finding out, is nothing like a Republican primary, a Village he may soon wish he could go back to.