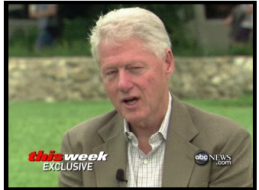 Former President Bill Clinton (calmly) responded to Rush Limbaugh’s statement yesterday that the responsibility for a “future incident such as Oklahoma City” would fall “squarely on the shoulders of Bill Clinton and Barack Obama” telling This Week host Jake Tapper that Limbaugh “doesn’t make any sense.”

“The only point I tried to make was that we ought to have a lot of political dissent — a lot of political argument. Nobody is right all the time. But we also have to take responsibility for the possible consequences of what we say…”I think we all have to be careful, We ought to remember [that] after Oklahoma City we learned something about the difference in disagreement and demonization.”

It’s interesting to hear Clinton tangle with Limbaugh, especially in such a calm, measured tone. It makes me wonder whether the Obama administration couldn’t put the former president to use as a sort of counter weight to the strident hyperbole coming the right. Clinton also said that he worries “about more careless language … some of which we’ve seen against the Republican governor in New Jersey, Gov. Christie.” Noting that between the rise of militia movements, and right-wing talk radio, the plummeting economy, and the rhetoric (now to be found on the blogosphere) there were “lot of parallels between the early nineties and now.” Add to that at lot of the current rhetoric coming out of Washington and “it all creates a climate in which people who are vulnerable to violence because they are disoriented like Timothy McVeigh was, are more likely to act.”

Those parallels, however, apparently don’t extend to midterms: “I think that the dissent is just as intense, if not more intense…But I think the outcome of the election is likely to be far less dramatic than it was in ’94” and that while the Republicans will likely see gains in November, if history is any guide, “I don’t think they’ll win either house.”

As for rumors of a Clinton on the Supreme Court Clinton admitted that he’d probably enjoy it and that Hillary would be fantastic, but that they were both too old, and preferred more active roles, and that “I’d like to see him put someone in their late 40s, early 50s on the court and someone with a lot of energy for the job.”

Part one of the interview below. (side note: Clinton looks to be in fairly good health all things considered).