Bill Clinton’s Today Show Interview Was a Disaster, But He Does Have One Valid Point 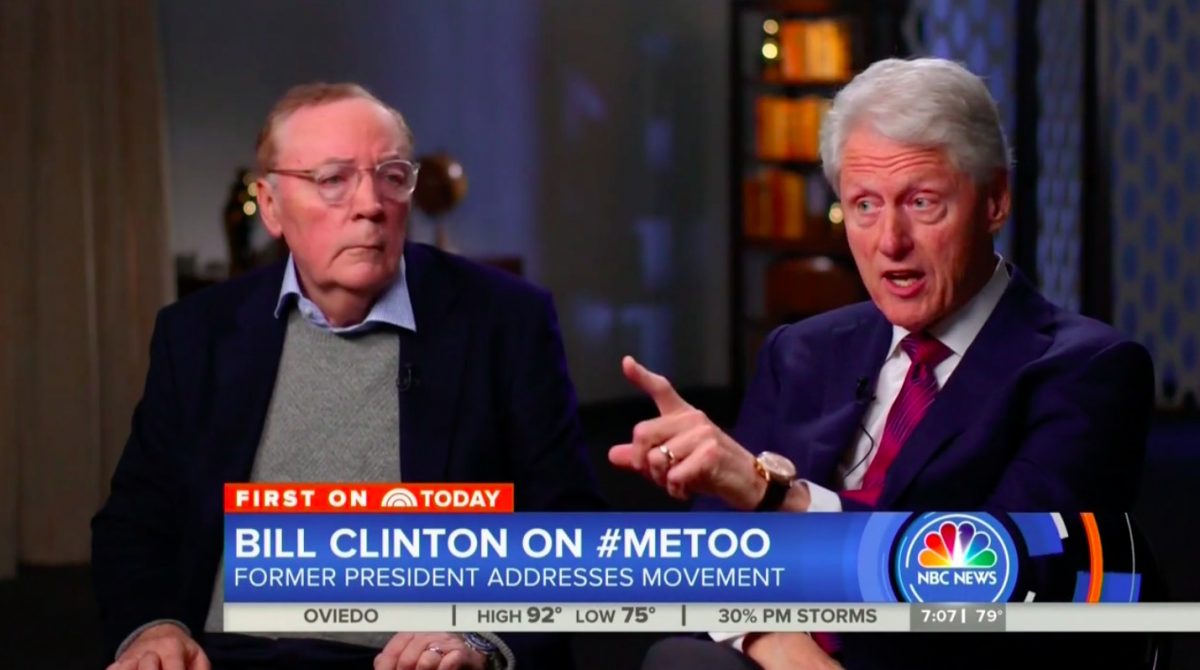 Before Donald Trump made me embarrassed for our country and my political party, the president who most angered me was Bill Clinton. In fact, my first documentary film was about how he outrageously helped censor an ABC television mini-series which was, in part, about his role in failing to stop 9/11.

I believe that when Clinton essentially got away with blatantly lying both to the American people and under oath, something permanently snapped in this country. You can even make a very strong argument that, rather ironically, Clinton set the stage for all of us to be desensitized by Trump’s far more audacious form of lying, and thus his own wife’s defeat to the current president.

It was with that background that I heard about Clinton’s much-discussed interview on the Today Show — which was supposedly to promote a new book, but which, by media acclamation, turned into a disastrous revisiting of his Monica Lewinsky scandal. Let’s face it, whenever S.E. Cupp, Mika Brzezinski, and Katy Tur all rip a guy who is normally a media-darling, that person has probably screwed up rather badly.

And, for the record, I agree that Clinton, thanks to his arrogance, ego, and diminishing verbal skills, butchered what was really a rather soft interview. It is difficult to imagine how poorly Clinton would have done if Craig Melvin had asked any of the following questions, none of which he has ever been seriously asked, and all of which would have been very relevant:

— Given the #MeToo focus on dramatic power differentials making consensual sexual relationships nearly impossible, why shouldn’t your one-sided intimate encounters with an intern like Lewinsky be considered sexual assault?

— Since the #MeToo movement, and even your own wife, have insisted that all women are to be believed in their stories of assault, why shouldn’t we conclude that you raped Juanita Broaddrick?

— When you brought your secretary, Bettie Currie, into your office on a Sunday morning the day after you lied in the Paula Jones deposition about not having had a sexual relationship with Monica Lewinsky, and you suborned her perjury by telling her a series of things about her own experiences which were patently untrue, why were you not worried that you had made her vulnerable to serious jail time? Did you ever apologize to her?

Instead, facing only rather benign questions about how he would have handled the situation differently if it happened today and whether he has apologized to Lewinsky, Clinton had a virtual meltdown. Instead of just taking a meager amount of responsibility for his own actions, swallowing his legendary pride, and simply apologizing to Lewinsky while also acknowledging that he was damn lucky to have not faced these allegations during an era in which Al Franken was somehow forced to resign, Clinton did what he always does…He made it about himself, while making stuff up.

The most bizarre part of the interview occurred when Clinton started to attack Melvin for supposedly ignoring “gaping facts” (whatever those are) and condescendingly presuming that his interviewer wasn’t well versed on the nature of these real facts. Of course, we were all left in suspense regarding these “gaping facts” because Clinton never mentioned what they actually are — instead wallowing in self-pity regarding all the financial debt with which he allegedly left the White House.

The key facts are these:

— Bill Clinton had a sexual affair with a lowly intern while president.

— He lied about it under oath on two separate occasions.

— He lied about it to the American people.

— He tried to destroy Lewinsky’s reputation to save himself.

— He obstructed justice by suborning the perjury of his own secretary.

I am unaware of any “gaping facts” which would provide any significant context to these facts, but Clinton is certainly invited on the next episode of my podcast to provide them. I am quite confident that neither John Kennedy nor Lyndon Johnson (both of whom were defensively cited by Clinton in the interview) ever had any of those things happen.

There is, however, one point Clinton made in the NBC interview which is both important and, unfortunately, true. While bragging and exaggerating about how much the American people stuck by him — thus allowing him to beat impeachment in the Senate — Clinton seems to be saying that the allegations against Trump in the Russian investigation are far more significant than what he faced, but that Republicans are exposing themselves as massive hypocrites because they don’t seem to care nearly as much about those transgressions as they did when it came to the charges against him.

While obviously not all the facts are in yet on Russia, I share Clinton’s pessimism that anything Robert Mueller could come up with, no matter how powerful, would ever convinced anything close to a majority of deeply-invested Republicans to abandon Trump. In fact, some of the very same “conservative” media stars who led the charge against Clinton — like Mark Levin and Rush Limbaugh — are now using chillingly similar arguments to attack Mueller and defend Trump in exactly the same way that Clinton’s media pals destroyed Ken Starr.

So while Clinton is correct to point out the right-wing duplicity here, he must also realize that if he had simply done the right thing and resigned from office, Trump would never have had a prayer of ever even obtaining the position to begin with.
When Clinton refused to resign and was able to successfully fight off removal from office, it felt to me like the beginning of the end of our Republic. Assuming Trump eventually does the same, for many of us it will feel like the actual end.
These two events must be forever linked in history.