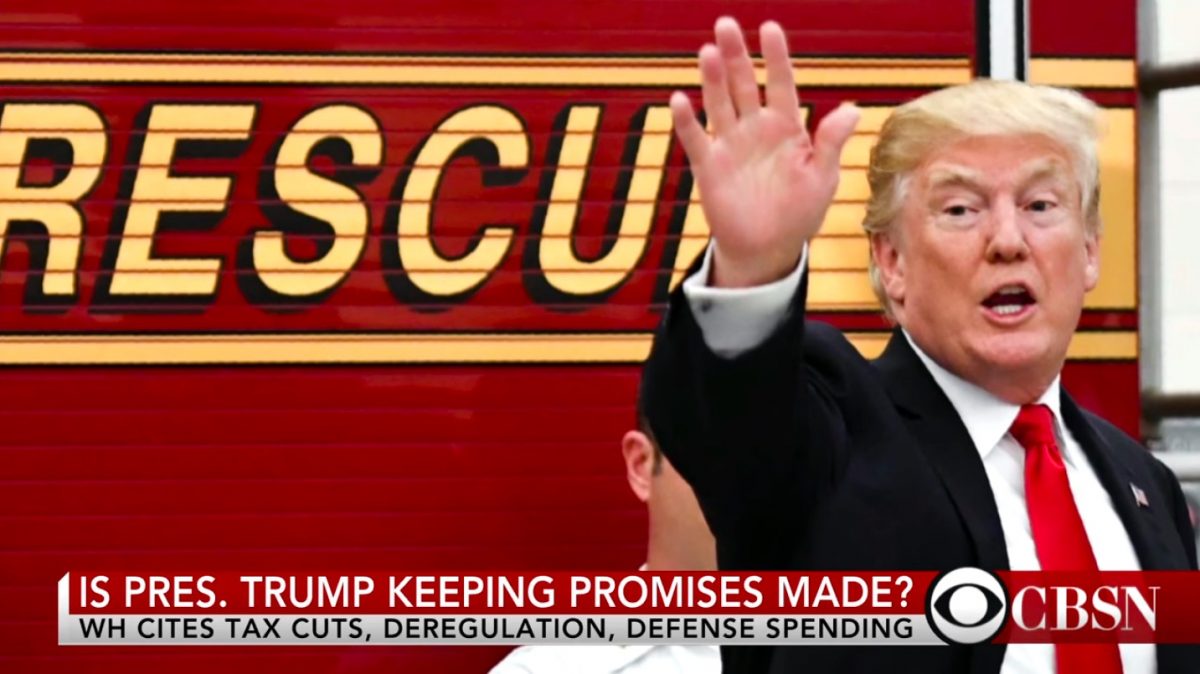 It is no secret that, despite numerous scandals, two big-selling bombshell books about him, and the ongoing Russian investigation, President Donald Trump’s poll numbers have recovered this year and are now in the realm of respectability. There are many possible explanations for this phenomenon, but many people who call themselves conservatives have settled on the one which makes them feel the best: Trump has exceeded our (incredibly low) expectations and now deserves credit for a lot of really good accomplishments.

I have recently seen this now popular position be suddenly postulated by major commentators for whom I have great respect, as well as via people of questionable character and intellect on Twitter and Facebook whose names I don’t even know to be real. As an ardent “Never Trump” conservative who has also tried extremely hard to remain objective about him, I have sincerely considered this argument and found it to possess several serious flaws.

The first is that, even if I grant their premise, I question whether the “ends justify the means,” or that the results justify the costs. I mean this both philosophically, as well as from a practical perspective.

In other words, if we conservatives are supposed to view the Trump experiment as a grand bargain where we have to put up with endless drama but are supposedly getting a lot of what we want in return, it seems to me that this is still a lousy deal, especially in the longer run. Trump’s costs — morally and politically — have been, just as we “Never Trump” conservatives have long warned, far greater than his benefits, even if this “he’s accomplishing so much” fiction is accepted as reality.

I have always viewed Trump as being much like a hurricane. Even the worst hurricane actually provides some positive, even critically important elements. For instance, very often areas which rarely get rain are provided a large portion of their yearly water supply through just one hurricane.

With Trump, we don’t know yet what “category” of hurricane he is going to be, or how long his storm is going to last. Right now, the best forecasts are that it will end up being a category 3, 4, or 5, lasting between 2 ½-6 ½ more years.

So, it is far too early know for sure how much destruction will ultimately be left in Trump’s wake so we can determine if enough rain fell in areas which needed it so that we can decide if he was worth all the trouble. But I also take issue with this growing narrative on the right that Trump is indeed making it “rain” in positive ways.

The right-wing “Trump accomplishment” narrative goes something like this: the economy is great, he’s keeping most of his promises, making amazing progress in foreign affairs, and Mueller’s Russia investigation is a big dud.

The two pillars of the economic argument seem to be the stock market and unemployment. But even if you somehow give Trump credit for the market boom from his election to his inauguration, the rate of the market increases for Trump’s year and a half is only slightly better than that which occurred under Barack Obama for his entire eight-year presidency. As for unemployment, I am old enough to remember when conservatives didn’t give credibility to that number because so many people had permanently left the workforce.

I’m not saying the economy is bad, I’m just not seeing much difference between now and what it was under Obama. More importantly, other than the tax cuts–which are great–I don’t see what Trump has really done to impact it much (I hear a lot about Executive Orders eliminating regulations but I have been convinced that any of these easily reversed edicts have really had much direct influence).

As for keeping his promises, there is no sign of his Great Wall, Obamacare is still the law of the land, our trade position with China has not fundamentally changed, manufacturing jobs show no signs of returning to the Rust Belt, Hillary Clinton will not be “locked up,” and he has not even been nearly as “presidential” as he assured us that he would be. He did, however, agree to nominate an apparent conservative to the Supreme Court, so there is always that.

The foreign affairs claim is even more dubious. While some interesting things seem like they might be happening, we really have no idea how any of this is really going to shake out and we have every reason to distrust whether Trump’s unpredictable decision-making in this realm has even been based on what he and his advisors thinks is really best for our country, rather than what serves his own personal self-interest.

Make no mistake, all of this, whether consciously or unconsciously, is at least in part about protecting Trump from the results of Mueller probe. As part of this “Trump has been better than we expected” canard, there has also been this myth created on the right that somehow what we have learned so far about the investigation has been good for Trump.

The cries of “Witch Hunt,” “The investigation is taking too long,” “The FBI is corrupt,” and “They have proven nothing” are as based in fantasy as they are eerily reminiscent of how Bill Clinton’s attack dogs helped him survive impeachment. The reality is that, to thinking people, what we have learned so far, and continue to do so on almost a daily basis, indicates an increasingly likelihood that Trump and his campaign committed very serious acts of wrongdoing.

And much like with what happened with Clinton, Trump’s supporters are trying to make the argument that he is just too valuable to not defend to the death, no matter how heinous the allegations, or credible the facts may become. Clinton effectively won that battle in a way that harmed our country, and it appears that Trump is well on his way to doing the same in a manner which is even more damaging to the nation.

Just because this “Trump accomplishments” narrative is appealing to enough people to make it effective does not make it remotely true, or right. You know, just in case that kind of stuff matters.