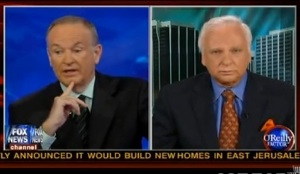 Bill O’Reilly had on his regular media analyst Bernie Goldberg last night to run down the media’s reaction (on both left and right) to the passing of the Health Care bill on Sunday, and echoed some of the same thoughts voiced by David Frum, the former speechwriter for George W. Bush, who made quite a stir yesterday in calling health care reform the GOP’s “Waterloo,” but a big win for the “conservative entertainment” business. Is this the beginning a more measured tone on right-of-center opinion media? Not likely.

First some background: amidst the gnashing of teeth and roaring of terrible roars on the right-of-center opinion media yesterday, came an interesting take from Frum, who basically placed the Health Care bill defeat for the GOP on a much grander scale. Calling it the “GOP’s Waterloo” in a blog post that was summed up thusly:

So today’s defeat for free-market economics and Republican values is a huge win for the conservative entertainment industry. Their listeners and viewers will now be even more enraged, even more frustrated, even more disappointed in everybody except the responsibility-free talkers on television and radio. For them, it’s mission accomplished. For the cause they purport to represent, it’s Waterloo all right: ours.

Last night, O’Reilly echoed that sentiment, though in much more measured way, when he said:

“I was listening and I was hearing almost hysteria. Not to say that it wasn’t entertaining…it was. I mean, they were crazed, they being the callers and the right wing hosts. It was entertaining, and I think they believe what they said. I didn’t see any guys being charlatans.”

We’ve noted a lot recently the transformation of Bill O’Reilly: from hard-charging “traditionalist” who apocalyptically damned what he called “secular progressives,” to a more measured and moderate version of his former self. That’s not to say that O’Reilly has gone soft – its just a recognition that O’Reilly sensibility has broadened in a way that makes him more appealing to a larger fan base.

So perhaps its instructive that a pioneer of the conservative entertainment business – or right-of-center opinion journalist – is recognizing the sentiments put forth by David Frum. Is this symptomatic of a larger trend on the right? Most likely not (or to paraphrase John Boehner “Hell no!”)

Frankly, as Frum correctly points out, health care reform is good for the “conservative entertainment business” which means that we will likely see more, not less. But it does look like some talking heads are pausing for reflection and taking a long look at the man in the mirror. One can only wonder what they will see.