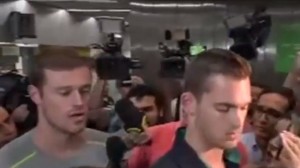 Matt Gutman of ABC is reporting that Brazilian sources say that Ryan Lochte and his three US Swimming teammates fabricated the claim that they were robbed.

Gutman reports that there is video of Lochte fighting with security at a Rio gas station.

This latest development follows last night’s dramatic scene in which two of Lochte’s teammates, Gunnar Bentz and Jack Conger were pulled off a US-bound flight in Rio by Brazilian authorities. Bentz, Conger, and Jimmy Feigen are all scheduled to meet with police today, according to an Associated Press report.

Lochte is already back in the US. Wednesday night, he had a phone conversation with NBC’s Matt Lauer in which he stood behind his claim that he and his teammates were robber, but seemed to change a few details of his story.

UPDATE 10:58 a.m. — ABC is reporting that a Brazilian police source claims: “one of the swimmers was seen on CCTV footage breaking down the door to the bathroom at the gas station and fighting with a security guard.”

UPDATE 11:20 a.m. Reuters is reporting that a Brazilian security source says the swimmers caused damage at the gas station, and paid for it in cash.

UPDATE 11:48 a.m. Brazilian newspaper O Globo is reporting that the gas station owner says the four swimmers vandalized the property by urinating on the walls, and tearing up a sign.