Brian Williams’ 2012 Gawker Email Should Have Been Early Warning Sign

Brian Williams’ 2012 Gawker Email Should Have Been Early Warning Sign 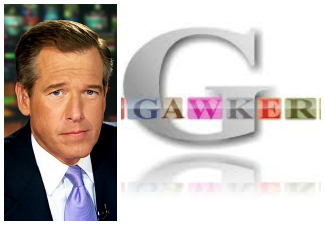 The Brian Williams saga is no longer a question of if, but when, as it pertains to his survival at NBC News…or in any major news capacity for the foreseeable future.

It’s truly sad to witness considering everything the 55-year-old Williams had going for him just two weeks ago: Fame, fortune, prestige, respect. The money–$10 million/year–has likely amassed enough to sustain him and his family for a very long time. Know this: Williams would likely trade that part for the other three items on the list if he could do it all over again.

And if you think you’ve heard the last of the wild exaggerations and flat-out lies in his retelling of his reporting–flying with Seal Team 6 when journalists are never embedded with such an elite force…or witnessing the fall of the Berlin Wall when his predecessor Tom Brokaw was the only one there Brandenburg Gate that night–something else pops up in another capacity that makes you scratch your head: Williams’ love for all-things Gawker…even going so far to write to the site’s founder (Nick Denton) to share that he checks Gawker’s “s*it” ten times per day.

If you missed it, here’s the original private email from Williams to Denton, which Gawker was Gawker-esque enough to publish for the world to see:

ND:
I hope you’re well. Happy New Year. A big congratulations to the new freelance weekend guy, Taylor Bernam. He’s done some good posts right out of the box. I do wish the main page featured more TV coverage (Brooklyn hippster [sic] Lana Del Rey had one of the worst outings in SNL history last night — booked on the strength of her TWO SONG web EP, the least-experienced musical guest in the show’s history, for starters). In my humble opinion as a loyal customer (you know I love you but the Blog View button will be the eventual cause of my death) and while I know you’re in the midst of an editor change, weekends have been allowed to go awfully fallow — and it was a fallow holiday period for those of us who check your shit 10 times a day by iphone. I know you’ve been watching NBC Nightly News religiously each evening and I’ll no doubt be getting a withering, detailed critique from you straight away.
BW

To which NBC’s PR team quickly scrambled to squash:

“Kevin — can you please have the post of Brian Williams’ email to Nick Denton taken down immediately? That was sent in confidence as friends and absolutely never intended to be public. A speedy removal would go a long way in maintaining the trust and respect we have for your site.”

In my last column, I noted that Williams–on top of the world with the aforementioned fame/fortune/prestige/respect–also had one of the easier jobs in journalism. Note: A 22-minute network news broadcast is full of field reports and taped packages. The job of Williams (or any network news anchor) is simply to read through stories and toss to said reporters and packages. There’s the breaking news aspect and the cool-under-pressure gene while multitasking that is called into play periodically, but most nights are really a breeze. Perhaps that’s what gave Williams the free time to check Gawker’s s*it ten times a day and critique SNL hosts. Either way, it’s emails like this that will likely be added to the fact-finding mission internally at NBC which will serve as piles of files for his career obituary.

A sad sight indeed. NBC must turn the page now. Keeping this suspension going for even one more day only distracts the network from the real task at hand: