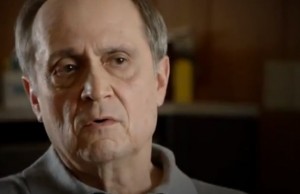 Whoever said “Politics ain’t Tiddlywinks” obviously never met Bill Burton and his case of poison-tipped, razor sharp Tiddlywinks. The former White House spokesman’s Priorities USA Action is out with a brutal new ad this morning that goes for Mitt Romney‘s jugular by suggesting that the Republican presidential candidate and former Bain Capital executive is morally culpable for the death of steelworker Joe Soptic’s wife.

The ad consists entirely of former GST Steel employee Joe Soptic telling the story of how, following the closure of the Kansas City GST Steel plant, he was unable to provide health insurance for his family:

I don’t think Mitt Romney understands what he’s done to people’s lives by closing the plant.

I don’t think he realizes that people’s lives completely changed.

When Mitt Romney and Bain closed the plant, I lost my healthcare, and my family lost their healthcare. And a short time after that my wife became ill.

I don’t know how long she was sick and I think maybe she didn’t say anything because she knew that we couldn’t afford the insurance, and then one day she became ill and I took her up to the Jackson County Hospital and admitted her for pneumonia and that’s when they found the cancer and by then it was stage four. It was, there was nothing they could do for her.

And she passed away in 22 days.

The spot, according to Priorities’ memo, is “the fifth in a series of a $20 million television and online project to educate voters about Mitt Romney’s business record and their impact on middle class families.  The first four related ads, ‘Heads or Tails‘, ‘Loris‘, ‘Donnie‘and ‘Stage‘ have been airing since mid-May.”

From a strategic standpoint, this ad is risky, but clever. Priorities’ biggest handicap is that they’re being badly outraised by Republican SuperPACs, but a controversial ad like this will surely get tons of free airtime on cable news programs, and drive discussions about political ads, but also about Romney’s record at Bain.

It’s also a tough ad to respond to if you’re a Republican, because any counter-argument hits the tripwire that is health care policy. Romney can argue that he had “left Bain” when Soptic’s plant closed, or dig up someone with a similar story to hit back at President Obama, but the fact is that, no matter who is responsible for this guy losing his health insurance, only one of these candidates has a health care plan that would have helped.

The downside, of course, is that this provides the Romney campaign with an opportunity to distract the media from the ad’s message with debates about whether it crossed the line. That’s a narrative that the media loves, because it’s easier than figuring out whether or not it’s true.