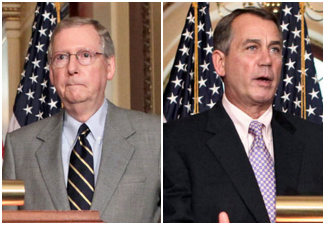 Another day, another political leader (or two) failing to grasp the very simple concept of optics and symbolism.

Today’s what-the-hell-were-you-thinking winners are Speaker John Boehner (R-OH) and Senate Majority Leader Mitch McConnell (R-KY) as it pertains to their respective no-shows to the 50th anniversary of the march on Selma. Did House Majority Leader Kevin McCarthy (R-CA) attend? Yes. RNC Chairman Reince Priebus? Yes. Former President George W. Bush and Laura Bush? Yes. Do all of these GOPers being in attendance mean Boehner and McConnell are excused for not taking a day to show unity around a truly historic event in our nation’s tumultuous history on race relations?

Absolutely not. Nor does it excuse Senate Minority Leader Harry Reid for not attending, nor the second and third ranking Senate Democrats (Dick Durbin of Illinois and Chuck Schumer of New York) from blowing it off, either. But Boehner and McConnell are the focus here, and here’s why:

Optics is a topic that has been discussed before on this space, particularly as it pertains to President Obama and ill-advised tee times. Note: As a fellow southpaw on the links and one who can appreciate the stress relief golf can provide regardless of score (I shot 62 this morning…on the front nine), nobody is begrudging someone with as stressful a job as Mr. Obama owns from getting away from it all for a few hours. It’s not exactly a new thing either: Democratic President Woodrow Wilson reportedly played 1200 rounds of golf. Republican President Dwight Eisenhower racked up around 800. Nixon loved it. So did Clinton. Party is irrelevant. With Mr. Obama (who has played over 200 rounds, which suddenly looks relatively small), the issue around optics is not around playing golf, but the timing of certain outings…particularly last summer when he was on the first tee less than 20 minutes after a statement on American Jim Foley’s beheading by ISIS, and especially for not going to Paris following terror attacks there when many other world leaders found the time.

In Boehner’s and McConnell’s case, each appears to at least be wise enough to leave the clubs in the garage this weekend (especially Boehner–a scratch golfer). But that doesn’t make the optic of two-thirds of government leadership not being in Selma yesterday any less embarrassing for the Grand Old Party, which has received the following percentage of the black vote in the past four presidential elections:

“We do dumb real well,” explained former RNC Chairman Michael Steele on MSNBC’s Morning Joe. “It is astounding to me that whether it is supporting the continuation of the Voting Rights Act or commemorating a pivotal part of American Civil Rights history, Republican leadership prefers to sit on the sidelines.”

Would Boehner or McConnell attending yesterday have done much to improve race relations, which took a hit last year via Ferguson/Michael Brown and New York/Eric Garner? Probably not. And it should be noted that Tim Scott (R-SC), the first African-American to be elected to the Senate in the South since reconstruction, is the Co-Chair of the Congressional Pilgrimage to Selma. Rep. Martha Roby (R-AL) was a co-sponsor of a bill to award Selma’s civil rights marchers the Congressional Gold Medal, the nation’s highest civilian honor.

These are tangible, noble actions by Scott and Roby. But it all gets muzzled thanks to Boehner and McConnell’s absence, and that’s a shame.

As Woody Allen once said, 80 percent of life is showing up. You would think those who have been on the political scene as long as Boehner and McConnell would understand the basic concept of optics and symbolism.

And when it comes to 2016 and the perception problem almost every Republican candidate will have when it comes earning trust of those African-American voters willing to judge a candidate by his or her character than the color of their skin, it’s top leadership did the party no favors by not making a trip to Selma on Saturday.