Carson Camp Admits He Can’t Win, But They Had a ‘Phenomenal Week of Raising Money’ 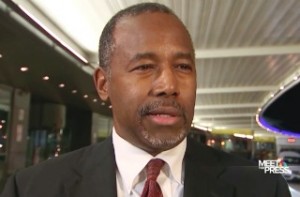 Despite Dr. Ben Carson being dead last in the race, he averred that he would remain in the campaign until Super Tuesday, or, as he put it, “until the people have decided.” The morning after said people decided by handing the good doctor a series of sobering, unambiguous defeats, a campaign confidant told Breitbart News Daily on Wednesday that although the campaign knew Carson had no shot at winning, he would remain in the race because he “had a phenomenal week of raising money.”

Williams repeated many of the Carson’s familiar talking points: namely, that he was drafted by the will of the people and that he has been unfairly maligned by the media and other candidates because he offers an alternative to “politics as usual.” In this narrative, Carson assumes the mantle of a protest candidate, nobly pursuing his quixotic campaign thanks to the contributions of those believe in him and his message.

“The media can ignore him as if he’s not in this race,” Williams said, “but the fact is the people who care about him, who are asking him to stay in the race, they’re still sending him their small donations of 5, 10, and 20 dollars. He’s had a phenomenal week of raising money and it says to him that they want him staying in the race despite the fact that they know that Carson is clearly not going to win the nomination. They feel there’s something bigger going on here.”

Carson has come under criticism for refusing to suspend his campaign in what many see as a mercenary bid to continue soliciting campaign contributions. His campaign has admitted previously that they have no strategy to secure the nomination. Carson himself has joked about his disorganized campaign’s haphazard management of funds. And in an op-ed published Monday he asserted that he would remain in the race “as long as we have revenue and support.”

Despite having the lowest delegate count, Carson is ahead of Ohio Gov. John Kasich in two recent polls.