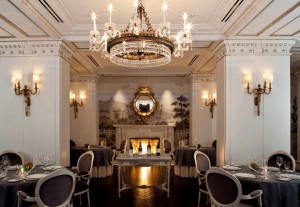 In the wake of complaints by Republicans that they never show up to anything President Obama invites them to (or something like that), the President tapped Senator Lindsey Graham (R-SC) to put together a guest list for a Wednesday evening dinner at Washington’s Jefferson Hotel. Among the scant details to emerge from the two hour-plus dinner Wednesday night is the fact that President Obama paid for the dinner with twelve Republican senators out of his own pocket, and that Sen. John McCain thought the dinner went “just fine.”

Pool reports from the dinner indicate that details of the dinner were tightly guarded, although they are sure to flow freely toorrow, when the participants themselves begin to tell the tale. So far, though, we know that the dinner was attended by the President, and Senators Lindsey Graham, Bob Corker, Kelly Ayotte, John McCain, Dan Coats, Tom Coburn, Richard Burr, Mike Johanns, Pat Toomey, Ron Johnson, John Hoeven, and Saxby Chambliss.

The dinner began at about 6:30, and apparently didn’t begin to break up until around 8:40, when Sen. John McCain was spotted leaving, telling reporters the dinner went “just fine,” with a thumbs up. A senior White House official later told the pool “The President greatly enjoyed the dinner and had a good exchange of ideas with the Senators.”

They also revealed that the President paid for dinner out of his own pocket, which is no small thing. The tasting menu at Plume, the restaurant at The Jefferson, runs $275 a pop for the “Premium Wine Experience” (and if there’s anything Republican Senators enjoy, it’s premium wine), which means, including tip, President Obama probably dropped in excess of four grand on dinner. Apparently, this entitles you to, among other things, something called a “pre-dessert,” which sounds like the best idea anyone ever had, ever.

The cynical view of this dinner is that it’s just a piece of political theater, designed to make President Obama look reasonable, and to make Republicans look like they don’t just hate the President, but there’s every chance that in a setting like this, given the President’s considerable personal charm, that some good might come of this. Time will tell.

From the White House press pool:

Pool Report #1: Motorcade is off and rolling at 6:20 pm to the Jefferson Hotel with nary a flurry in sight on this non-snowquester evening.

Pool Report #2: Motorcade arrived at Jefferson Hotel, just blocks from the White House, at 6:25 pm on a drizzly cold evening. Pool is holding in a sideroom that appears to be a library– lots of old books and dark wood,low lighting.No word yet on where the president and senators are dining.

Pool Report #3: The White House is treating the dinner details as state secrets.So far, it won’t confirm which senators were invited or which senatorsattended, who paid the bill or even where in the Jefferson Hotel theyate. There is a restaurant at the hotel — Plume — but no word whether POTUS and the GOP senators ate there or in a private room.I will let you know if the info black-out changes.Pool noted a group of reporters gathered across the street from the hotel on the corner of M and 16th St. They might be able to grab the senators on their way out the door. Pool was whisked away in the motorcade.

Pool Report #4: Pool witnessed McCain walked out of the mtg at 8:41 pm. A reporter asked how the meeting went. McCain said just fine and flashed a thumbs up. Coburn and other senators, Burr, Toomey and Corker emerged.Coburn made the same gesture — a thumbs up sign. Motorcade is off, headed back to the White House at 8:43 pm.

Pool Report #5: Motorcade is back at the White House at 8:48 pm and we have a full lid. Btw, poolers also spotted Sen Ayotte leaving the Jefferson so reports that is was an all-male evening are false. There was at least one woman present.

Pool Report #7: From a senior administration official: “The President greatly enjoyed the dinner and had a good exchange of ideas with the Senators.”

Pool Report #8: The White House says POTUS paid for the dinner out of his own pocket. Other than the additional details provided in pool report #7, no further details are expected.