Clinton: Half of Trump Supporters Part of ‘Basket of Deplorables’
video

Clinton: Half of Trump Supporters Part of ‘Basket of Deplorables’ 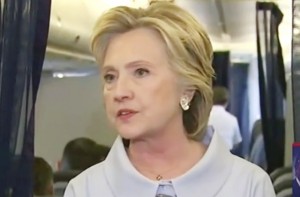 Hillary Clinton told donors tonight that about half of all Donald Trump supporters are part of the “basket of deplorables.”

What exactly did she mean by that? Well, this is what she said:

“To just be grossly generalistic, you can put half of Trump supporters into what I call the basket of deplorables. Right? Racist, sexist, homophobic, xenophobic, Islamaphobic, you name it. And unfortunately, there are people like that and he has lifted them up. He has given voice to their websites that used to only have 11,000 people, now have 11 million. He tweets and retweets offensive, hateful, mean-spirited rhetoric.”

She said some of them are simply “irredeemable,” but made it clear that the other half of Trump supporters have genuine frustrations about how the government has let them down.

“They are just desperate for change,” she said. “Doesn’t even really matter where it comes from. They don’t buy everything he says but he seems to hold out some hope that their lives will be different.”

One day after promising to be aspirational & uplifting, Hillary insults millions of Americans. #desperate https://t.co/OrBkowI4Sd

Hillary, placing people in "baskets", slandering them but admitting after 8 yrs, they are "desperate for change." https://t.co/OrBkowI4Sd