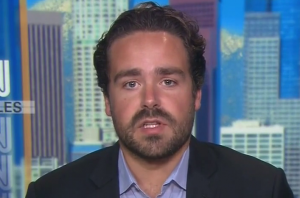 Maybe the real headline should be “CNN Embarrassed by its Media Reporter…”, after they published what turned out to be a completely botched hit job on conservative website Washington Free Beacon.

First, some background. Earlier this year, the Washington Free Beacon’s Andrew Stiles discovered that ABC News’ George Stephanopoulos had donated more than $75,000 to the Clinton Foundation. It appeared to be a conflict of interest given Stephanopolous’ seemingly hostile interview of a Clinton Foundation critic earlier in the election cycle.

In both instances, the Free Beacon loudly protested. Now given Byers’ history with the website, I’m tempted to say it would be somewhat unbecoming for a newly-hired reporter at a major network to be digging for any dirt on them. But dig he did, and ended up with an “exclusive” he seemed convinced was a major find.

#Break: The @FreeBeacon editor who led charge against Stephanopoulos contribs to Clinton Foundation is a Trump donor http://t.co/Hm37DMetNV

“Andrew Stiles, the digital managing editor of Washington Free Beacon, has given $544.25 to Trump’s presidential campaign, nearly all of it in the third quarter of this year,” Byers breathlessly reported. “Stiles’ occupation is listed as “#1 TRUMP FAN” on the FEC filing.”

Now immediately after writing this paragraph, two alarm bells should have gone off in Byers’ head. First of all, nearly all campaign donations are made in nice even amounts: who donates $544.25 to a cause? That sounds more like some sort of transaction. Second of all, doesn’t listing your occupation as #1 Trump fan” sound kind of like– oh, I don’t know– an obvious joke?

Turns out it was. Back in August, the Washington Free Beacon bought two dozen of the iconic “Make America Great Again” hats for the entire staff. The purchase was made not out of admiration (we’re talking about a website that literally cut an anti-Trump attack ad), but as a joke. When this was pointed out by readers, Byers stealth-edited the above paragraph conceding that the “donation” was in exchange for the hats.

This D.C.-based reporter can personally attest that roughly half of Washington owns these freaking hats. Off the top of my head, I personally know three reporters from three separate media organizations and one Senate staffer who do. I also know for a fact that employees of a liberal publication recently threw a Trump-themed party in which the hats were ubiquitous. In every single one of these cases, the hats were worn as an act of mockery, not admiration.

In short, the entire gist of Byers’ piece was inaccurate. Stiles wasn’t some closet Trump fan who was hypocritically going after Stephanopoulos while donating to campaigns himself. Indeed, anyone who has spent more than two minutes reading the Washington Free Beacon would know that.

That didn’t stop Byers from implying the opposite. “At Free Beacon, Stiles has written extensively on Trump and the 2016 presidential campaign generally,” he writes. “His most recent post about Trump suggests that the Republican frontrunner ‘won’ the Democratic debate by tweeting about it. A previous post indicated that the recent chaos among House Republicans was beneficial to Trump’s presidential ambitions.”

Oddly enough, Byers neglected to link to either piece. Here is a sample paragraph:

Trump, who live-tweeted the affair, deployed Nixonian wit to create powerful word-images that painted a picture of American Truth: Everyone on stage that night was a loser. A few of them might have what it takes to make it through the Democratic primary, but there has yet to be a candidate from either party who has demonstrated the leadership qualities of The Donald. His words speak for themselves.

Here’s the conclusion of the second piece:

Analytical extrapolation concludes conclusively that the current Republican frontrunner, Donald Trump, will almost certainly win the White House in 2016, and America will be great again.

We’re left with three possibilities, each more distasteful than the last. Option one is that Byers didn’t realize either piece was satire, in which case he is seriously obtuse. Option two is that he saw the headlines (which were also obviously satirical), didn’t bother reading either piece, and reported on them anyways. In that case, he’s simply lazy, and his reporting suffered as a result.

Option three is he knew these piece were satire, which would have telegraphed Stiles’ real feelings about Trump, and wrote his article anyways. If that were the case, he did so while intentionally misrepresenting the content of the Stiles’ blog piece in the body of his report. I hope to God that wasn’t the case, because if he did engage in a such a petty smear, he has no business being employed by CNN.

Either way, Byers owes Stiles (and CNN for that matter) an apology. But the happy ending to the story is that ultimately the Washington Free Beacon got the last laugh in a truly ironic fashion. While ignoring a request for comment by Byers, they did respond issue a sarcasm-laden statement in response to a request for comment… from Politico.

Mediaite has reached out to CNN for comment. This piece will be updated if we receive any statement.