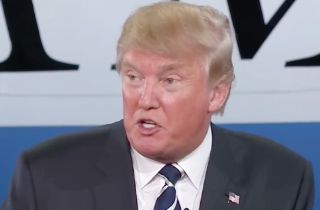 Donald Trump, the frontrunner for the Republican presidential nomination, went after former President George W. Bush on Friday, saying in a new interview that the Sept. 11th, 2001, terrorist attacks happened on his watch.

“When you talk about George Bush – I mean, say what you want, the World Trade Center came down during his time,” Trump told Bloomberg’s Stephanie Ruhle when asked if he could console the American people in times of crisis, as Bush did after 9/11 and President Barack Obama did after the 2012 school shooting in Newtown, Conn.

Ruhle then jumped in: “Hold on! You can’t blame George Bush for that.”

“He was president, okay? Blame him or don’t blame him, but he was president. The World Trade Center came down during his reign,” Trump responded. “If you look at Sandy Hook, those people are still begging for help.”

A spokesman for Bush told The Daily Mail that the 43rd president would “definitely not” respond to such a suggestion from Trump. Many observers interpreted the comments as Trump blaming Bush for the terrorist attacks.

How pathetic for @realdonaldtrump to criticize the president for 9/11. We were attacked & my brother kept us safe.