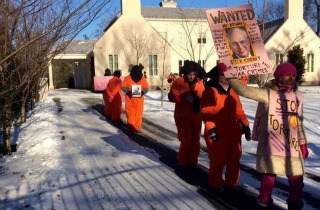 Two protesters from the anti-war group Code Pink were arrested outside former Vice President Dick Cheney‘s McLean, Virginia home on Saturday morning for walking onto his property. They were protesting the 14th anniversary of the opening of the Guantanamo Bay prison, which was officially opened in January 2002.

A Fairfax County police spokesman told Reuters that the two demonstrators refused police orders to leave the property and were promptly taken into custody. Tighe Barry, 57, and Eve Tetaz, 83, will both face trespassing and disorderly conduct misdemeanor charges.

Here are a few of Code Pink’s tweets from during the protests:

The group also marched outside of CIA Director John Brennan‘s home, but reportedly without incident:

On our way to Frying Pan National Park in Herdon VA to convene before going to CIA director John Brennan's house to say Stop Torture!!!

CODEPINK and Witness against torture gather at home of John Brennan in VA to protest torture and drones. pic.twitter.com/IIfE7K6nbW

'We are a community of resistance!" Activists gathering at home of John Brennan. pic.twitter.com/Jm2UHVClpV

Ever since the Senate Intelligence Committee released the CIA “torture report,” Cheney and other former Bush Administration officials have defended the enhanced interrogation tactics used to extract intelligence from prisoners at Guantanamo Bay and elsewhere around the world.

President Barack Obama pledged to close the prison during his 2008 presidential campaign, and has said he still hopes it can be done before he leaves office in January 2017.