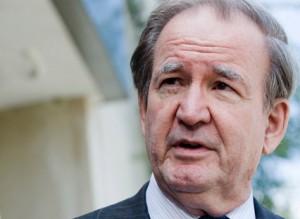 ColorofChange.org is perhaps most famous for having organized a boycott against Glenn Beck‘s advertisers while he was at Fox News, as well as for having gone against the network itself with a “Turn Off FOX” sticker campaign. Now, the group is setting it sights on MSNBC, specifically on convincing the network to drop its longtime conservative commenter and news analyst, Pat Buchanan.

“Why Buchanan?” you may ask, probably rhetorically because come on… Color of Change? Buchanan? You can’t venture a guess? You guys. We’ll refer you to the group’s website:

For years, Pat Buchanan has passed off white supremacist ideology as legitimate mainstream political commentary. And MSNBC continues to pay him and give him a platform on national TV to do it.

Buchanan just went on a white supremacist radio show to promote his new book — which argues that increasing racial diversity is a threat to this country and will mean the “End of White America.”

And, in an email to members, the group highlighted specific instances of Buchanan’s supposed racist ideology and sympathies:

Here are a few examples of what Buchanan has said in the past:

* “This has been a country built basically by white folks … ”

* “Sonia Sotomayor does believe in race-based justice basically at the expense of white males and to advance people of color. The truth is that’s what Barack Obama believes as well.”

* “America has been the best country on earth for black folks. It was here that 600,000 black people, brought from Africa in slave ships, grew into a community of 40 million, were introduced to Christian salvation, and reached the greatest levels of freedom and prosperity blacks have ever known … no people anywhere has done more to lift up blacks than white Americans. Untold trillions have been spent since the ’60s on welfare, food stamps, rent supplements, Section 8 housing, Pell grants, student loans, legal services, Medicaid, Earned Income Tax Credits and poverty programs designed to bring the African-American community into the mainstream.”

* “[Former KKK Grand Wizard] David Duke is busy stealing from me. I have a mind to go down there and sue that dude for intellectual property theft.”

These are just a few of many, many examples of Buchanan’s barely-disguised bigotry. Buchanan has defended Hitler. He’s said that “in a way, both sides were right” during the civil war. Buchanan often implies that white people are more intelligent than people of color, and just this weekend (in a different radio interview), he refused to disavow the idea that white people have superior genes.

Think it’ll work? Think the campaign should work? And, if MSNBC does decide to drop Buchanan, what other prominent conservative voice in media would you like to see taking his place?