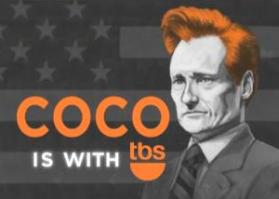 In a shocking decision, Conan O’Brien will land in November at a destination many hadn’t considered – TBS.

The network has recently jumped headfirst into the late night fray with George Lopez‘ Lopez Tonight, a flashy, up-and-coming show that moves to MidnightET following O’Brien’s. Here’s TBS’ release (note the interesting wording) and a promo for Conan.

First of all, a snap judgment on the decision tells two things – one, TBS has committed fully to competing, at least in the cable arena, for title of most-watched network. With Conan there, the current comedy line-up during prime time (featuring Tyler Perry‘s shows and some syndicated content like NBC’s The Office and My Name is Earl) may be headed for a makeover as well, with a bigger emphasis on original content. Also, Conan believes in George Lopez to form a workable duo. Lopez lands big-name guests and has a following, but his brand of humor frequently falls back into race-based aphorisms and recycled themes.

Here’s the brief TBS video announcement/promo, and below, the full release:

Note the language in the release – the headline said Conan “picks” TBS, and George Lopez “personally called” Conan. Clearly, there was a huge push by the network to court the former NBC host:

Comedy icon Conan O’Brien is joining TBS to host a late-night talk show that is expected to debut in November. The Emmy-winning comedian’s new program will be followed by Lopez Tonight, which will shift to a midnight time slot.

O’Brien began talks in earnest with TBS just last week, after George Lopez personally called him to ask that he consider joining the network’s late-night line-up. “I can’t think of anything better than doing my show with Conan as my lead-in,” Lopez said. “It’s the beginning of a new era in late-night comedy.”

Said O’Brien: “In three months I’ve gone from network television to Twitter to performing live in theaters, and now I’m headed to basic cable. My plan is working perfectly.”

O’Brien and Lopez will give TBS a dynamic lineup in late-night television. TBS – which has built a programming slate that appeals to a young, diverse audience – expects O’Brien to be a long-term addition to the network’s late-night landscape. O’Brien will host his hour-long, yet-to-be-titled show Mondays through Thursdays at 11 p.m. (ET/PT).

“Conan has been the comedic voice for a generation. TBS already has a huge audience of young comedy lovers, and Conan’s show will give these fans even more reasons to watch our network,” said Steve Koonin, president of Turner Entertainment Networks.

With the addition of O’Brien’s show, TBS will establish two hours of late-night talk. Lopez Tonight, while just a few months old, has already become a destination show for a diverse audience. The Lopez Tonight audience is young as well, with a median age of just 34.

“For decades, late-night TV has been dominated by broadcast television,” Koonin said. “Now, with a young audience and a growing late-night lineup, TBS is set to be the choice of comedy fans for years to come.”

O’Brien is well-known from his many years in comedy. He grew up in a large, Irish Catholic family in a suburb of Boston. His love of comedy began at an early age and carried on when he entered Harvard University, where he earned a degree in history. During his years at Harvard, he also wrote for the legendary Harvard Lampoon publication, eventually serving as its president.

After leaving Harvard, O’Brien went to Los Angeles, where he found several writing jobs for television, including HBO’s Not Necessarily the News. After returning to the East Coast, O’Brien joined the writing team at Saturday Night Live, earning his first Emmy in 1989. He was writing for the hit show The Simpsons when Lorne Michaels approached him about a new late-night series for NBC. In 1993, Late Night with Conan O’Brien launched. The show ran for 16 years, ending when O’Brien briefly took over The Tonight Show.

O’Brien is currently touring the United States and Canada with his live show, Legally Prohibited from Being Funny on Television Tour.

TBS, a division of Turner Broadcasting System, Inc., is television’s top-rated comedy network. It serves as home to such original comedy series as My Boys, Tyler Perry’s House of Payne and Meet the Browns, as well as the upcoming Neighbors from Hell and Are We There Yet?; the hit late-night series Lopez Tonight, starring George Lopez; hot contemporary comedies like The Office and Family Guy; and specials like Funniest Commercials of the Year; blockbuster movies; and hosted movie showcases. TBS also presents major live events, including star-studded comedy festivals in Chicago and Las Vegas.

Turner Broadcasting System, Inc., a Time Warner company, creates and programs branded news, entertainment, animation and young adult media environments on television and other platforms for consumers around the world.