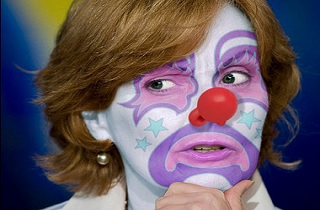 It seems like only yesterday when the conservative media went from ignoring the killing of unarmed 17 year-old Trayvon Martin to shrieking at the top of their lungs that President Obama should shut his Kenyan yap about it. Maybe that’s because it pretty much was yesterday, but a new day has dawned, and the conservative media has found something of sufficient gravity for the President to weigh in on: a rodeo clown whose minstrelsy has drawn the condemnation of Republicans in the former Confederate State of Missouri.

This rodeo clown thing should be a huge win for conservatives, who are so sensitive about people thinking they’re racist. Even if you grant the possibility that whoever thought up the idea for that performance might have simply been unfamiliar with the concept of minstrelsy, the fact that everyone else recognized it was enough for Missouri state officials, Republican and Democrat, to denounce the performance. Even Tyrone Biggums could see it was racist, even if accidentally so. It was a rare moment of kum ba yah, a chance for conservatives to show they’re not completely tone-deaf on race.

That some would make the rodeo clown a cause celebre is not all that surprising, and neither is the obligatory “somebody did something completely different to a white ex-president 20 years ago at a weelky New Jersey rodeo” defense, but after lambasting President Obama for weighing in on the murder of a black teenager and the unjust arrest of one of his personal friends, nobody would have the balls to expect him to intercede on behalf of this state fair rodeo clown, right? Right?

Dame Peggington Noonington — cat blogger; astute observer of the painfully obvious; and longtime sufferer of a crappy hotel room, thanks to Obama — has some more unsolicited advice for the president, which he should definitely follow if he wants to be like that great bipartisan messiah, Saint Ronald Jesus Reagan, in His name we pray. Here are today’s words-she-wishes-she-could-put-in-Reagan’s-mouth-like-the-good-old-days-but-she-can’t-because-he’s-gone-sad-face so she will put them on the Wall Street Journal instead:

Let me suggest a classy Obama move that might go over well.

From his Vineyard vacation spot he should have the press office issue a release saying his reaction to finding out a rodeo clown was rudely spoofing him, was, “So what?” Say he loves free speech, including inevitably derision directed at him, and he does not wish for the Missouri state fair to fire the guy, and hopes those politicians (unctuously, excessively, embarrassingly) damning the clown and the crowd would pipe down and relax. This would be graceful and nice, wouldn’t it? He would never do it. He gives every sign of being a person who really believes he shouldn’t be made fun of, and if he is it’s probably racially toned, because why else would you make fun of him?

Ah, yes. If that uppity blackity president had any class at all, dahhhhling, he would take time out of his vacation — vacations are for white presidents anyway — to explain to America that racist jokes are FUNNY, PEOPLE! and not even necessarily racist, and SO WHAT, PEOPLE?

I agree, the shot about the vacation was a nice touch, and so is the subtle inference that the President isn’t “classy,” but it’s Peggy Noonan‘s feigned ignorance about the “racially toned” nature of the show that’s really priceless. While it’s true that there is no history of racists putting on whiteface and explaining politics to people as they would to a sleeping toddler that they don’t want to wake up, Peggy Noonan is still old enough and wise enough to understand what was wrong with this. That she then expects to snap her fingers and have the President do a tapdance for her so she’ll think he’s “classy” is the white icing on the privilege cake.