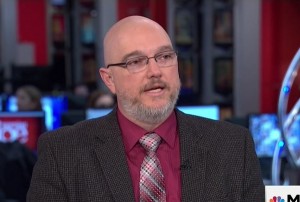 Tuesday morning’s Morning Joe featured an interview with the nicest person in conservative politics, Going Red author and Hot Air correspondent Ed Morrissey, laying out his plan to get Republicans to win back the White House, and giving a shout-out to Barack Obama. Just how nice is Ed Morrissey? Not only did he praise President Obama for his 2008 electoral strategy, he also couldn’t think of anything worse to say about Donald Trump than that he’s not sure Trump is “temperamentally suited” to attract new voters in swing counties.

That’s the premise of Morrissey’s book, that the key to Republicans’ chances at taking back the White House is to figure out how to win in a handful of pivotal “swing counties” that have flipped fro red to blue in recent years. Without getting into the weeds of the likely brokered Republican convention, Morrissey did say that it would be “difficult but possible” for either of the current frontrunners, Donald Trump or Ted Cruz, to successfully execute his strategy. Presumably, Ed wrote much of Going Red before the current GOP race congealed into the mess that it is now, back when daydreams of a more palatable candidate yet lived.

Morrissey did acknowledge that Donald Trump presents something of a wild card in some of these counties:

Trump is a different case. I’m cautious about making predictions about Donald Trump because he has confounded a lot of predictions in this cycle. His argument is that he is going to turn out other voters so strongly that these demographics don’t necessarily matter in a general election, but we don’t see any evidence that that’s the case.

Morrissey added that he didn’t see that Trump effect working in a place like Hamilton County, Ohio, but that “in the other counties it’s possible, but I would be skeptical about his ability to do that in the i=I-4 corridor because there is a very diverse number of voters there.” He added that “The Puerto Rican vote is key in the I-4 corridor and Hillsborough county, and I don’t think he’s addressing the economic concerns of the Puerto Rican community.”

Finally, Ed urged Republicans to turn away from a national strategy, and take a page from one Barack Hussein Obama. “I would say that Republicans have to get used to running presidential campaigns as basically 435 congressional campaigns,” Morrissey said. “That’s what Barack Obama did in 2008 and he made an emotional connection with voters in 2008 that was strong enough to sustain him through the 2012 election when he wasn’t nearly as popular as he was in 2008.”

Maybe Morrissey is on to something here. If neither Trump nor Cruz win the nomination on the first ballot, is there anything preventing Republicans from nominating Barack Obama?