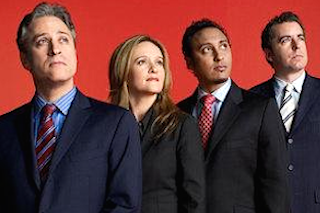 With the The Daily Show’s Best F#@king News Team Ever in Austin for a week of shows leading up to the midterm elections, the group decided to get together for a live episode of the new “Daily Show Podcast without Jon Stewart.” Head writer Elliott Kalan moderated a discussion with correspondents Jason Jones, Samantha Bee, Aasif Mandvi, Jessica Williams and Jordan Klepper that focused on those often awkward, always hilarious field pieces they do from all over the country and the world.

There were plenty of great stories told during the 45 minute show, but one highlight came when Jones talked about the best advice he received when he joined the team nearly 10 years ago. Jones explained that Stephen Colbert, who was just leaving to launch The Colbert Report when he started, “developed this character that we all sort of do now, he was the pompous newsman that we all kind of came in doing impressions of.” He added, “For that, we owe him almost everything.”

“He gave me one piece of advice,” Jones said of Colbert. “He said, when you do these interviews, check your soul at the door.”

“He did, he said that to me too,” Bee, who joined the show two years before her husband, chimed in.

“He said that to me too,” Mandvi added.

“I ran into him, he said the exact same thing,” Klepper said.

“There goes my special moment,” Jones lamented. “I’m not going to tell that story anymore.”

“Would it be better if he were telling people all sorts of different advice?” Kalan asked Jones. “‘Oh, he told me to keep my soul on me at all times.'”

Listen to audio below, via The Daily Show:

And you can download the full conversation on iTunes.