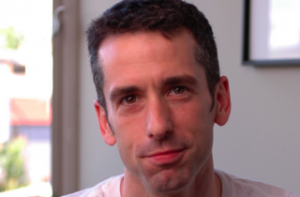 In a post for The Stranger, Savage waded into the political fray yet again. This time, he took aim at Hillary Clinton‘s detractors. Specifically, he went after those who are still hung up on her old anti-marriage equality stance.

When describing one of these detractors, a podcaster called Melvin, in detail, he said the following:

Well, I’m for Hillary—or Bernie or both Hillary and Bernie (or Bernie and Hillary)—and I disagreed with her on marriage equality then… but I am capable of taking yes for a motherfucking answer now.

That particular phrase and idea were a major sticking point for Savage:

The fiery rhetoric continued as he conceded that Clinton’s opposition to same-sex marriage may have been a “political calculation,” but pointed out that the LGBTQ community worked hard to “change the math so that those political calculations would start adding up in [their] favor.”

“It’s fucking moronic—it’s political malpractice—to attack a politician for coming around on your issues,” he said, moving on to remind readers that marriage equality was only one LGBTQ issue and that there are plenty more to worry about that will require unity to fix. By that logic, it is best not to question why or how a politician changed their mind, but to embrace it and move forward with them as an ally.

As is often the case with Savage, his message got mixed reactions. When one person tweeted it with praise, another responded with this:

@amelieanomaly @fakedansavage Oh stop it right now. Marriage equality is NOT the reason we can’t rally behind Shillary. Honestly.

Then, Savage responded with this:

I was addressing one argument made constantly, not every argument made ever. Thank you for playing Twitter. https://t.co/Vhkcijqg7L