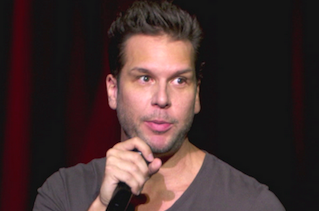 Entertainment Tonight is reporting that comedian Dane Cook has been permanently banned for performing at The Laugh Factory in Los Angeles after an incident involving a waitress at the popular comedy club.

According to ET’s unnamed source, Cook “used vulgar, offensive language towards a waitress. When he was approached by the owner, his attitude got even worse, and the two subsequently got into an argument. Cook allegedly told the owner, ‘I own this place!'”

Cook, whose bio remains on The Laugh Factory’s website Wednesday afternoon, has been a regular presence at the club for years, setting a record with seven straight hours of stand-up there in 2008. He made news again in 2012 when he bumped a slew scheduled comedians to deliver an allegedly “rambling” set that was described by his fellow comedian T.J. Miller as “vicious, misogynistic, cruel, and arrogant.”

Mediaite has reached out to The Laugh Factory for comment and will update accordingly.

Watch a clip from Cook’s most recent special below, via Comedy Central:

UPDATE — 7:33 p.m. ET: In what appears to be an implicit reference to the “fuss” over his alleged ban from The Laugh Factory, Cook posted this teaser for his show at The Improv tonight on Twitter and Instagram:

Come see what the fuss is all about! This will sell out quick. See you at 10 at the @hollywoodimprov gang. The line up is all star including @nealbrennan @juddapatow. #TROUBLEMAKER