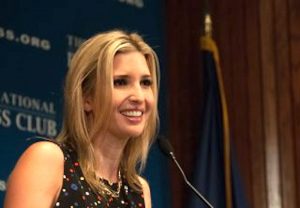 A new Instagram account called “Dear Ivanka,” is attempting to appeal to President-Elect Donald Trump‘s daughter Ivanka Trump as “the voice of reason,” and hopes that she will denounce some of her father’s rhetoric and “rebel” against some of his views. The account has gained a following of more than 2,000 people (and counting) since November 21.

It is run by the Halt Action Group, and they post photos that express their concerns of a Trump presidency. For example, the caption of one photo reads, “Dear Ivanka, I’m gay and I want to be able to marry.”

Dear Ivanka, I’m gay and I want to be able to marry

In the comments section of one of their photos, one person asked them to explain what they’re doing. The response reads, “Ivanka is part of the official transition team. She is the ‘kind,’ ‘rational’ and ‘feminist’ spokesperson for her father’s campaign, and now, administration. These ‘Dear Ivanka’ posts are an open letter to her.”

Dear Ivanka, I’ve been raped and I need to have an abortion

@dear_ivanka Where do you draw the line? We all know you don’t choose your parents, but you can rebel against your dad at some point? It would help all of us…

@dear_ivanka I’m concerned that your dad and your family are using the highest office in our land for personal financial gain.

@dear_ivanka will you keep another Jew like me safe from Steve Bannon and the KKK? From @ardenwohl

Tonight, the group plans to hold a candlelight vigil tonight at 6:00pm outside The Puck Building in New York City, where she lives (or lived) in the penthouse apartment with her husband Jared Kushner and children.  The post for the event says, “The new Trump administration says wait-and-see, but we’ve seen enough to to know that we are scared of what’s coming on January 20th. Come with postcards, letters, signs, slogans, flowers, LED candles, or just yourself, and let your voice be heard!”