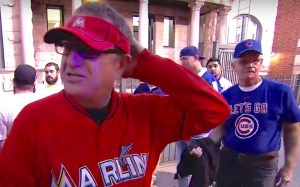 If you’ve been watching the World Series, perhaps you’ve noticed the absence of “Marlins Man,” the guy in the orange Miami Marlins jersey who has become a fixture in prime seats at major sporting events over past few years. But Marlins Man, whose real name is Laurence Leavy, has not attended any of this year’s Series games. And he will not be in the house for Game 7 tonight.

Leavy told the Miami Herald that he’s received death threats from Cleveland fans, and he does not feel safe at Progressive Field.

Marlins Man will not be at Game 7. It will be the first World Series he has missed in five years. Says decision has to do with his safety.

Sadly, it’s true. Not worth chancing that one psycho person wants to be a hero to Indians fans. #betterSafeThanSorry pic.twitter.com/v4oZdZwSj8

In 1997, the Marlins defeated the Indians in the World Series. Some fans, evidently, harassed Leavy over that during a June trip to an Indians game. Leavy posted a video to Facebook in which he said he had to leave early because he did not feel safe.

From then, Cleveland fans, he claims, were relentless in threatening him on social media.

“After getting dozens of death threats and hundreds of threats of violence against me, thousands of people I had to block [on Twitter], I decided it wasn’t worth my safety or health,” Leavy told the Herald.