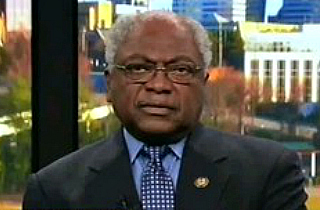 In a satellite radio appearance Wednesday morning, Rep. James Clyburn (D-MD) scolded “extreme right-wing blogs” for not being “news” and for acting in manner he believes is destructive like pre-Holocaust Nazi propaganda outlets.

Asked by Sirius XM POTUS host Jon Decker whether race relations have improved under President Obama, Clyburn answered in the affirmative before going off on the “negative” aspects of the Internet:

“You have manufactured controversies. You have people’s words and phrases being misrepresented and looped through the news media and thrown out there on the Internet, and people run with it because these things start getting reported in the mainstream media, and before you know it, people believe that stuff.”

He warned that such “manufactured controversies” could have similar consequences as seen in pre-Holocaust Germany:

“The people of Germany believed Hitler’s foolishness that led to the Holocaust. They believed that stuff. People will tend to believe what they hear through the media.”

Before citing specific outlets, Clyburn said that many of these negative stories originate from people who “are not media people,” but are “bloggers for the extreme right-wing.” The controversies over ACORN and the resignation of USDA official Shirley Sherrod, Clyburn said, are examples of right-wing blogs feeding “misrepresentations” to the mainstream media.

He concluded: “The media has not been discerning enough, to say to people, ‘This ain’t news. This is foolishness.”

Listen below, via SiriusXM POTUS:

[h/t Reason]
[Ed. note: This post has been updated to reflect that Jon Decker was the host, not Smerconish. The interview also took place Wednesday morning, not on Thursday.]