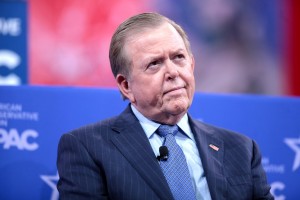 When asked by Dobbs to account for why Secretary John Kerry and President Obama adopted what he described as “language control” describing ISIS and radical Islamic terrorism, Huckabee responded:

You just wonder, when they went to high school, did they ever read George Orwell? Did any of them ever understand about the kind of twisting of language to make it appear that it’s something opposite of what it is so that we can essentially numb the minds of the masses? And so it is that the great unwashed out here are supposed to just fall in line and accept the fact that everything that President Obama and Hillary Clinton have been doing has just been terrific. But whether it’s on trade — I heard you talking about that earlier — whether it’s on dealing with terrorism, Lou, the problem is the wheels have come off this cart, and this country is starving for the kind of bold and decisive leadership that we have not seen in the past seven years.

Dobbs, himself a fervent Trump supporter, praised Trump for “delivering those messages powerfully” and “effectively” in a manner Dobbs described as “impressive.”

In his novels and essays (like the seminal piece “Politics and the English Language”) Orwell explored how language could be gelded and manipulated to advance political agendas. Huckabee also invoked the author to criticize Democrats last week when he wrote on his website that the administration’s tack of releasing redacted records of the Orlando shooter’s phone calls resembled the totalitarian Ministry of Truth from Orwell’s dystopian novel Nineteen Eighty-Four.