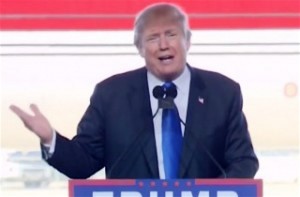 Despite Donald Trump‘s rhetoric on the campaign trail that the Obama administration’s military intervention into Libya was a mistake, Trump strongly advocated for the U.S. military to remove Muammar Gaddafi back in 2011.

Trump argued several times on the campaign trail that removing Gaddafi was a mistake. Here’s just one instance, on Meet the Press with Chuck Todd in October.

Of course it would be. You wouldn’t have had your Benghazi situation which is one thing which was just a terrible situation. But, of course, it would. Libya is– is not even– nobody even knows what’s goin’ on over there. It’s not even a country anymore.

But as Buzzfeed’s Andrew Kaczynski pointed out Tuesday, Trump was on the record in 2011 strongly supporting U.S. intervention into Libya and the removal of Gaddafi.

“I can’t believe what our country is doing,” said Trump on his video blog at the time. “Gaddafi in Libya is killing thousands of people, nobody knows how bad it is, and we’re sitting around we have soldiers all have the Middle East, and we’re not bringing them in to stop this horrible carnage and that’s what it is, it’s a carnage.”

“Now we should go in, we should stop this guy, which would be very easy and very quick. We could do it surgically, stop him from doing it, and save these lives. This is absolutely nuts. We don’t want to get involved and you’re gonna end up with something like you’ve never seen before,” he argued.