Tweeter-in-Chief Donald Trump found himself in a bit of a pickle on Friday morning when several Twitter users noticed, commented on and retweeted a two-year-old post commemorating the anniversary of the Sept. 11, 2001 terrorist attacks in New York City, Washington D.C. and rural Pennsylvania.

In the original tweet, posted on Sept. 11, 2013, Trump said he “would like to extend my best wishes to all, even the haters and losers, on this special date, September 11th.” When it went viral on Friday morning, the 2016 presidential candidate’s staff quickly located and deleted it. Unfortunately for them, others had already screenshot and reposted it for all to see:

Hey @realDonaldTrump you must’ve accidentally deleted this tweet I linked earlier but don’t worry I saved it for you. pic.twitter.com/sFPI6lfDXN

Never fear, for the Donald apparently didn’t mind the original tweet. Hence why his account tweeted a quoted version of the original:

When Business Insider asked Trump spokeswoman, Hope Hicks about the matter, she replied: “It is from several years ago.”

Trump then tweeted a more thoughtful, less loser-y and hater-y commemorative message asking his followers to “take a moment and remember all of the heroes from a very tragic day that we cannot let happen again”:

Let’s all take a moment to remember all of the heroes from a very tragic day that we cannot let happen again!

For reference, Trump’s latest Sept. 11-themed tweet can be found nestled in between two of his otherwise typical posts — one mocking a fellow presidential candidate (i.e. Bobby Jindal), and another poking fun at a company he doesn’t like (i.e. NBC): 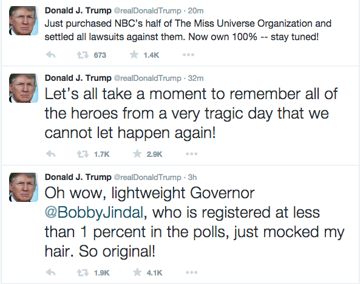