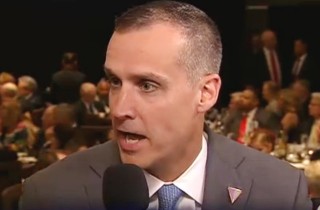 “The Donald J. Trump Campaign for President, which has set a historic record in the Republican Primary having received almost 14 million votes, has today announced that Corey Lewandowski will no longer be working with the campaign. The campaign is grateful to Corey for his hard work and dedication and we wish him the best in the future,” announced spokeswoman Hope Hicks in a statement.

Lewandowski had come under increased scrutiny in recent weeks after Trump’s campaign failed to organize at a level generally expected of Republican presumptive nominees after they clinch the nomination. The disorganization was bad enough that one NBC headline stated bluntly “Donald Trump Doesn’t Have a Campaign.” Lewandowski had consolidated power early in the primary season when his endorsement of a nontraditional, off-the-cuff campaign style won out over veteran campaign consultants Roger Stone and Sam Nunberg‘s suggestions of a more traditional campaign.

Lewandowski was thrust into the national limelight after he was arrested by Florida police for assaulting then-Breitbart reporter Michelle Fields. Lewandowski initially denied even touching Fields, but video evidence later emerged showing him grabbing her arm. The charges were later dropped, but not before dozens of female reporters called for his firing.

Trump stood by Lewandowski throughout the scandal, and again a week later when Lewandowski was caught on camera roughing up a protester. “I give him credit for having spirit,” Trump said, while denying the man in the video was Lewandowski.