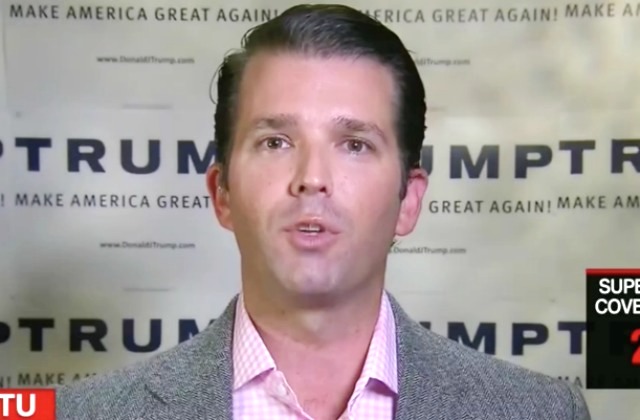 The White House preemptively responded to Rachel Maddow‘s reporting on President Trump‘s 2005 tax returns tonight, but Trump himself has yet to weigh in. But Donald Trump Jr. has already taken to Twitter with his reaction.

And he’s openly thanking her:

Thank you Rachel Maddow for proving to your #Trump hating followers how successful @realDonaldTrump is & that he paid $40mm in taxes! #Taxes

So after months of saying @realdonaldtrump paid no taxes and was a bad businessman etc etc Rachel Maddow releases his 2005 tax return where he made $150,000,000 and paid $40,000,000 in taxes. I'd say that's pretty successful. I didn't know she was a conservative???!!! #thankyoumaddow #trump #taxes #taxseason You can't make this stuff up. While they will do absolutely anything to take him down they always seem to make him look better as a byproduct of their biased and seemingly anti-American hatred. #fakenews

Watching the media aka #fakenews implode on tv now because they got what they wanted is simply awesome. #thankyoumaddow #TrumpTaxReturns

He also took a shot at CNN:

Now @CNN is upset that the returns that they have been dying to get their hands on for 18 months are out but it doesn't fit their narrative!

There’s already been speculation (including by David Cay Johnston, the journalist who obtained the returns and spoke to Maddow tonight) that Trump himself may have leaked the returns.