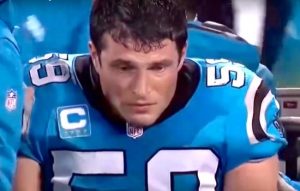 Late in the fourth quarter of the Carolina Panthers’ 23-20 win over the New Orleans Saints on Thursday, Panthers linebacker Luke Kuechly suffered an injury while making a tackle and was down on the field for several minutes.

At first, it appeared as though Kuechly suffered a leg injury of some sort. Later reporting revealed that the linebacker was being checked for a possible concussion. And Kuechly, who missed three games in 2015 due to concussion, was likely thinking about the potential ramifications of another.

This left him in tears, as he was being examined by the training staff.

Fans watching around the country were taken aback by the sight of Kuechly crying, and many expressed their sorrow via Twitter:

Oh man. #Panthers LB Luke Kuechly is crying on the field after his leg injury. Heartbreaking.

@RapSheet
?? for Luke! One of the BEST NFL players today and such a GREAT guy off the field.

I regard @LukeKuechly as one of the great examples in the #NFL in every regard. Hope injury not as serious as his emotions suggested

@Edwerderespn tough to see that, felt so bad for him. Hope he gets well soon

Luke Kuechly crying as they cart him off the field breaks my heart. That’s passion. pic.twitter.com/R15MvBTqGV

Absolutely heartbreaking to see Luke Kuechly crying and taken off on a cart. #TNF

“Seeing that look on his face. Crying. That worried me more than anything else.”

If the sight of Luke Kuechly, carted away and crying, doesn’t make you think for just a minute about the nature of this game…

That video of Kuechly crying legit broke my heart.

Seeing Luke Kuechly go down with a concussion and start crying on the field because he was confused was one of my lowest moments as a fan.

Seeing Luke Kuechly crying like that while being taken off the field has to be one of the most saddest things I’ve seen in football.